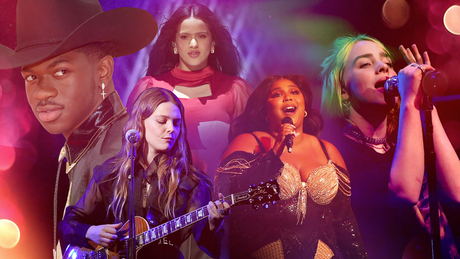 The Grammys were a mixed bag last night, given the news of the tragic death of basketball legend, Kobe Bryant along with his 13 year old daughter and 7 others on the helicopter. May their souls rest in peace.

Picking up her hosting duties from last year, Alicia continued her bad hosting this year. I think she is going for the homegirl route but it just ends up sounding like winging it and her best bits were the musical ones because…surprise!…she is a musician. That being said, she looked great and had 4/5 (depending on how you classify the outfit with a denim jacket added) outfits throughout the night.

Overall, I have to say it was a solid night. All the performers brought their A game. The night began with Alicia and Boys II Men singing “Hard to say goodbye” in honor of Kobe and the show officially started with Lizzo who also dedicated her performance to Kobe.

Lovebirds, Blake Shelton and Gwen Stefani sang their duet, “Nobody but You” and Tyler the Creator had a unique performance that had me wondering what was going on. Usher gave a performance in honor of Prince with FKA Twigs dancing , apparently she wasn’t asked to sing. I don’t think the song was a good fit for Usher and also why didn’t they fit his pants??

Camilla Cabello gave a performance that had people tearing up, dedicated to her dad who was in the audience and Demi Lovato made a return to the stage since her overdose to sing her single “Anyone” which got her a standing ovation.

Lil Nas X still having the time of his life had a remix performance with BTS, Billy Ray Cyrus and surprise guest, Nas. Ariana Grande did a medley of songs and there was a really nice tribute to Nipsey Hussle and everyone in Eritrean wear was a nice touch. Run DMC and Aerosmith had a reunion, Alicia sang her new single with help from Brittany Howard

Award wise, it was a Billie Eilish night as she won most of the major awards including Album of the Year, Lizzo nabbed one on air (3 in total) while Tyler the Creator got Best Rap album. Dan + Shay got the country group/duo and Dj Khaled and John Legend won for Best Rap/Sung. Still feel they should have let Lauren London speak a bit. Why one earth best comedy album was live is beyond me and as an aside, I don’t fault the more popular black celebs boycotting the Grammys after the way they have been treated. If they are going to keep bypassing and giving the awards to just white artists, then what’s the point?

Overall, it was a decent show that went on way longer than it should have. Hopefully, this is Alicia’s last year of hosting. They need to do better with sound and if they had time to do a tribute to the show’s producer, then there’s time to fit in more televised awards. They also need to figure out a way to be more inclusive and not have a one person wins all theme, every year. It gets old.

Did you watch? What was your favorite part?

Have You Listened To Celine Dion’s “Courage”?