Home > TV > My Thoughts on Season 5 of #BlackMirror 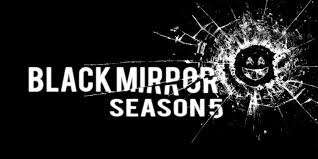 I actually joined the Black Mirror bandwagon kinda late. With short episodes, it was a quick binge and I liked it a lot. So much so, I ranked all the episodes at the time (which you can find here). I felt last season was a bit uneven (see my thoughts here). I had no interest in watching the Black Mirror movie, Bandersnatch because the interactive format just felt like it’d be a chore so I wasn’t sure what to expect for Season 5.

With just 3 episodes, once again, it was a quick and easy binge and I have to say I quite liked it. I will admit it is a little different from what we’ve been given in the past. I tried to pinpoint what exactly was different and I think this season was less complex and not as dark as previous seasons. 2 of the 3 episodes actually had a happy ending. A lot of the stories were more personal and humane. And while technology still played a big part, it wasn’t the focal point as it has been in the past.

Here’s what I thought of each episode:

Striking Vipers: This probably was the episode that stuck close to episodes past and was the most complex. In fact, I considered the episode a mind-fuck. A lot of pacing and set up was involved in this episode and I liked it. I liked it but I still had so many questions and couldn’t quite reconcile the virtual world and reality. I wasn’t even quite sure what Karl wanted. I kept wondering so what happens if they both chose male characters, same thing? The ending really was a fair compromise and showed honesty can be the best policy sometimes, eh? As a friend pointed out to me, we were actually given some clue nuggets along the way. I think this was the strongest of the episodes

Smithereens: I thought this was the weakest of the three. I got the guilt. I got the mental anguish involved, I just didn’t get the fixation on Brett Bauer (nicely done by Topher Grace) and why didn’t they just immediately get him on the phone? We never quite knew what Chris wanted. He said he just wanted to say his piece but that was some great lengths he went through just to “say his piece”. Also, for some reason I thought guns were hard to get in the UK?

Rachel, Jack and Ashley Too: Centering on a family that seemed rocked by a death in the family and all dealing in their own way. 15 year old Rachel is obsessed with pop sensation, Ashley O and gets close to her the best way possible via her electronic doll. We get to see Ashley’s life from her POV and all is not as it seems. Miley Cyrus plays the pop star and does a good job but I feel like this episode could have been an episode on Disney channel.

Overall, it’s not quite the level of what it used to be but you know, you can’t fault a show for trying new things. I still liked it. Have you watched this season yet? How would you rank the episodes and what were your thoughts?

It's Not Me, It's You - TV Shows That Don't Do It For Me Anymore

My Thoughts On The Movie - #JoyNetflix