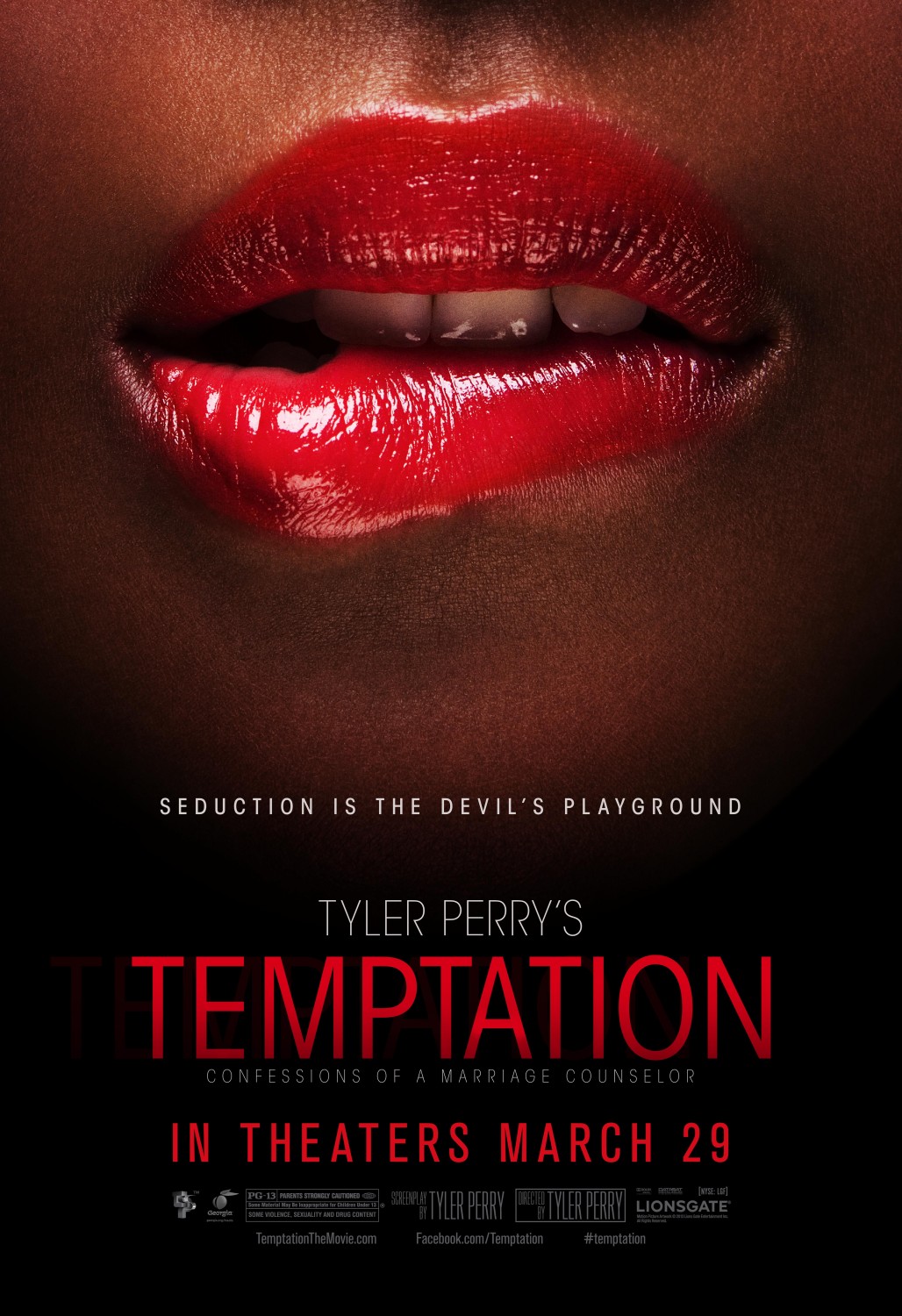 First of all, I feel like I should get the official name of this movie right because simply calling this movie, “Temptation” isn’t enough and also an African American movie by Tyler Perry has to have his name in the title so tickets can be sold (or so I presume). So to start things off correctly the official title of this movie is: Tyler Perry’s Temptation: Confessions of a Marriage Counselor. Now that’s out the way, I would also like to say that if you are wondering whether to see this movie just know that every Tyler Perry movie is automatically a dvd movie and going to see it at the movie theater is either for support or the movie going experience.

The synopsis of this movie is a religious young lady, Judith (Jurnee Smollet-Bell) from a small town, who has been married for 6 years to a man, Brice (Lance Gross) she has known since she was 6 years old meets Harley (Robbie Jones) or as you may have seen in the trailer, Kim Kardashian’s character saying – only the largest social media inventor since Mark Zuckerberg. Judith is completely bored by her marriage and her husband pays her no attention, even forgetting her birthday at some point. She begins an affair with Harley and her life is turned upside down. Brandy Norwood, plays Melinda a lady on the run who starts working at Brice’s pharmacy. Vanessa Williams is Janice, owner of the matchmaking company where Harley and Judith meet and Kim Kardashian rounds up the cast as Ava, a hoity toity, label loving superficial coworker of Judith’s who is constantly ragging on her looks and trying to give her a makeover.

I am not quite sure how to start with this movie because I understand Tyler Perry shouldn’t get a pass but I often grade him on his own curve. He has a formula and sticks to it and “Temptation” wasn’t any different. It had a “moral” story to it, it was predictable per usual but I have to say there was a twist that I didn’t see coming. Jurnee Smollet was fantastic in her role as Judith, she has really grown as an actress and I am looking forward to seeing her on True Blood. Robbie Jones, played a good villain as Harley and had chemistry with Jurnee, I was a bit hesitant about the casting but after watching the movie I saw why. It was sad seeing Vanessa Williams in this role, she’s just so much better than this. Once again, Brandy is given a role where she has to be deep and Ms. Norwood has never quite got to the point where she can play deep convincingly. She over dramatizes with facial expressions and it just comes off as too much. And oh Miss Kim K, in her first film role…ok  so this was a good role for her, I can see why she was cast but it was so obvious that she is not an actress. I think what made it worse is her diction/accent whatever you want to call it. I think more investment should have been made with a voice coach to temper down her valley accent and not make it sound like a cat was being murdered everytime she spoke. But if you are looking to ogle her pre pregnancy body, there’s a lot of scenes with her in tight clothing, with one prominent booty shot. Tyler Perry ain’t no dummy. Also ladies, Robbie Jones and Lance Gross flaunt god-like bodies and there’s a scene where Lance steps out the shower – I didn’t realize I had started praying when I saw the goodness in front of my eyes. Too bad his acting isn’t as awesome as his body.

Once again, this movie was elementary. There were some inconsistencies, I actually didn’t see the point of Brandy’s character till maybe the end. The pharmacy owner, was clearly in the storyline for comic relief but it wasn’t so funny and seemed forced. The flow of the movie wasn’t seamless and I want to say the biggest damage to this movie was subpar acting that was so obvious in a mediocre script. It’s enjoyable enough but this movie should have been a Lifetime movie and I recommend it for dvd…or if someone else is paying.

This week on the Music Charts