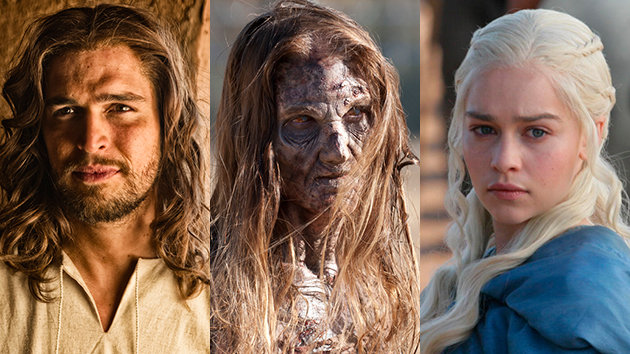 …cuz Cable is coming for ya!

Ok I am being dramatic but I am also being serious. TV Execs have decided to bombard us on Sundays. Sunday just has a lot going on – Walking Dead, The Bible, Game of Thrones, The Good Wife, Celebrity Apprentice, Revenge, Real Housewives of Atlanta and others. Everyone was curious about yesterday’s outcome because it was a big night. The Bible, a surprise ratings hit for the History Channel, was having it’s final chapter of its mini series. The Walking Dead, AMC’s cult hit was having its Season 3 season finale and HBO fan favorite, Game of Thrones was having a Season 3 premiere. Well, how did they stack up?

Game of Thrones had 4.4 million viewers (HBO is a subscription channel so usually doesn’t have as big a number as others, so this is really good)

The Walking Dead won the night with 12.4 million viewers.

You may be wondering what the fuss is about and I’ll be glad to tell you. There was a time these numbers were unheard of for cable TV. These were numbers you saw on regular network TV but even now a show on Network TV is lucky to break 10 million, the big numbers lately seem to be from their sports shows. To give perspective, the biggest numbers on Network TV was the NCAA championship on CBS. New episodes of Revenge and The Good Wife had 5 million and 8 million respectively. Bravo’s highest watched reality show, The Real Housewives of Atlanta had 3.3 million for it’s finale last night compared to a new episode of ABC’s Red Widow that drew 4 million. That’s so crazy to me that a reality show and a drama series are that close in ratings.

The slow decline of ratings on Network TV makes me think that they should be wary for a number of reasons. Gone are the days where you only had the Big 4 channels (and CW), cable has expanded rapidly with a whole lot of channel options and these channels aren’t sitting on their laurels, they’ve given us quality shows like Breaking Bad, Mad Men, Sons of Anarchy to name a few. Cable doesn’t have as much restriction as network TV and some have argued that this helps them better flesh out a story to its maximum, I tend to agree with this and so do most award institutions because in the past years more nominees have come from cable tv than from network tv. Another thing to consider, is the new successful mode of broadcasting as showcased by Netflix’s House of Cards. More shows are being developed and more companies eg Amazon is getting in on the act. Should they be worried? The last thing that makes me think they should be worried is quite frankly, I don’t have faith as much faith in Network TV as I used to. I start a show and I am not sure how long it’ll be on the air. So if I have to pick between starting a show on Network TV or starting one on Cable, I’d go with Cable because there’s a much higher chance of it being on air for much longer.

What do you guys think?

Bravo is on a roll!

My Take on Tyler Perry's "Temptation"