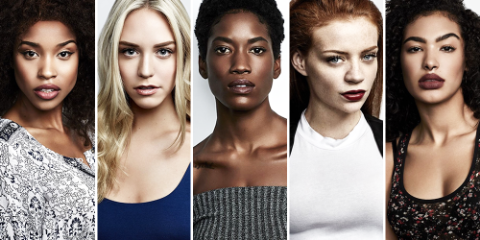 If you haven’t noticed, there is nothing America loves more than a reboot. Whether or not it is needed. When I heard that America’s Next Top Model was getting rebooted, I groaned and wondered how it would fare considering Tyra Banks was not returning as host. Now, don’t me wrong. Tyra Banks is annoying af but as the host on ANTM that woman was top notch. Tyra knows everything about modeling and her knowledge and enthusiasm shone through on the show.

I’d watched all 22 seasons over 12 years and stuck through as people began to fall away from the show and dog it. Through the reinventions – British Invasion, Guys vs. Girls etc, I still watched and enjoyed it. I’d say the only criticism I had were some of the judges changes and that social media score thingie. Hated that. Anyways, we were blessed to have Nyle DiMarco as (what we thought) the last Top Model winner (see pic below). He is so beautiful and also was the first deaf winner.

Well, Rita Ora was announced as the host and that raised my annoyance to 100. Like, of all the people in the world, why Rita Ora. She’s probably best known as the babe who broke Rob Kardashian’s heart but I knew the sucker that I am would still be watching. So come premiere night, I tuned in and many weeks later, I have to say I have had a change of heart and this has been a pleasure to watch.

Naturally, there’s been a new panel of judges who are refreshing in that they aren’t trying to be all nice-nice, they are honest and call out the contestants when need be. They also don’t make the situations about them (ahem, Tyra). The vibe of the show has definitely changed to appeal to a younger demographic. For example, instead of Tyra Mail it’s now a Rita-Alert. Social media is heavily integrated and they send out the message that they are just not looking for a model but a “Boss” i.e. someone who can be a model, business owner and many other things.

Noone is Tyra, but Rita does a good job hosting the show. The cast of girls seem younger and younger (probably because I get older and older and they don’t make models my age), there seems to be less drama so far in the rebooted season but it’s nice to be proved wrong. This is one reboot I can get behind.