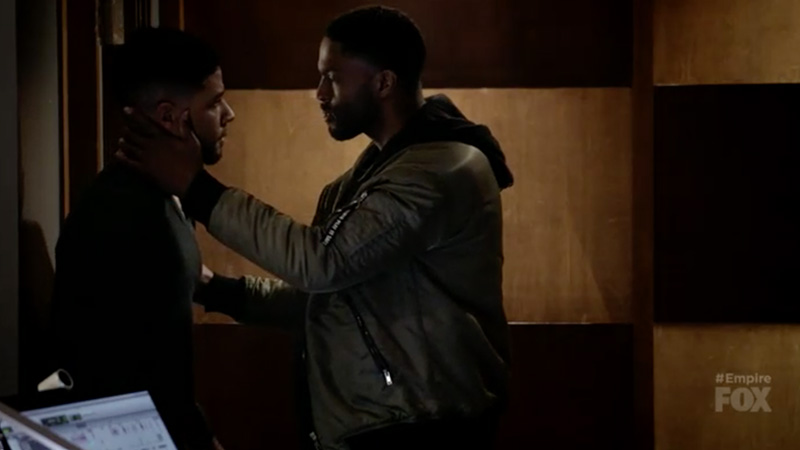 We begin this week’s Empire with Andre playing bingo with his formerly “dead” grandmother. The thing that struck me immediately about this scene was that granny was wearing a fierce set of false lashes. #pensionergoals

Hakeem is apparently working on a song for Ryan Coogler and he’s hoping it makes it onto one of his soundtracks. Since Empire is so focused on being au fait with current pop culture does this make Hakeem Meek Mill? I mean it’d make sense, but I digress…. Also, Hakeem claims that this song is the one that’s going to “finally” make him famous. So being the youngest son of a hip-hop legend and the former CEO of Empire didn’t afford him any fame before? I’m very confused.  Hakeem wants to add Tiana to the song as a duet but both Becky and Jamal tell him what a bad idea this is. Hakeem being Hakeem, he insists that everything will be fine and that his fiancée will have no problem with him working with his ex-girlfriend. Sure Hakeem….

We meet the fine ass musical director for the ASAs, D-Major, who wants the Lyons family to perform together as Cookie previously teased but neither Jamal nor Hakeem is having it. Jamal angrily confronts D-Major in his studio and this turns into an angry make out session, which quickly turns into angry sex. Well ok then Jamal!

The Lyons are right back to their bickering over which songs to perform at the ASAs when Andre crashes the party by introducing them all to grandma Leah. Lucious is rendered speechless by the sight of his mother and he warns the entire family that they shouldn’t be fooled by Leah’s sweet old grandma act.

He explains to Cookie that his mother was dead to him the day she got locked up. She was later released under new proposals in the Reagan administration and he randomly bumped into her on the street one day. He knew that he was not in a financially secure position to be able to take care of her then so he kept her as far away from his young family as possible. Lucious once again claims that nobody understands how dangerous his mother really is….

As usual, Becky is right and The Formerly Virgin Laura freaks out when she finds out about Hakeem and Tiana’s duet. Hakeem lies to her and tells her that having her on the song was beyond his control. I’ve peeped a few lingering looks here and there between Hakeem and Tiana so I guarantee that this won’t end well.

Andre interrupts Lucious and Thirsty taking Leah back to her nursing home and he decides to take her to his house. However, Leah insists on going home with “her Dwight” instead.

Thirsty picks up meddling reporter Harper and after issuing some not-so-veiled threats her way, he leaves her under a dark and sketchy looking bridge, where she’s quickly abducted by a couple of his hired goons. I’ll be very surprised if we ever see Harper again.

Jamal figures out that D-Major has not yet come out as gay and he’s not about that hiding life so he breaks things off with him.

Cookie’s sisters Candace (Vivica A. Fox) and Carol (Tasha Smith) make another appearance. Candace is there to let them know that she’s tired of taking care of Carol’s kids and Carol needs to come get them as soon as winter break is over. Carol later meets with Candace to beg her to give her a little bit more time until she’s told Cookie about how she used to help Lucious kill people back in the day. Candace (like all of us) tells her what a horrible idea this is. The sisters are apparently talking about murder loudly enough to be overheard by a random man dining across from them. This man turns out to be a former acquaintance of Carol’s and an undercover FBI agent. Carol, you’re in danger girl.

Rhonda gifts Anika all her unused baby paraphernalia and while she’s visiting Anika, she gets a flashback of the fall that lead to her miscarriage. However, this time she remembers that she was pushed and she didn’t “trip” as she previously thought. We are reminded that the last thing Rhonda saw before she blacked out was the red sole of a Christian Louboutin ballet flat and when Anika lifts up her leg to rub her aching feet, thus revealing her own Louboutin flat, Rhonda finally begins to put two and two together.

The Lyons men finally get it together and produce a song and performance worthy of the ASAs so I guess we can expect to hear the song again and again until we actually get the ASA episode we’ve been hearing about since the beginning of the season.

Leah wakes Lucious up in the middle of the night and takes him to the dining room where she’s apparently baked dozens of cakes for him to eat. After cutting him a slice, Leah threatens Lucious with a knife for putting her in a home for 21 years. She lets him know that she regrets not killing him when she had the chance and the episode ends with Lucious forcible shoving down the cake as Leah stands over him with a knife. I guess Lucious wasn’t lying about her after all…

My Thoughts on #OscarsSoWhite (and the Academy in general)