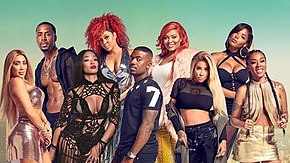 Ray J finally makes an appearance in Episode 2. He tells us he is trying to make money and babies with Princess. He is with A-1 and Safaree. A-1 is telling us how he has 7 #1 singles on the charts – I have to google this and see what songs these are. Ray asks him if they’re trying to have kids and A-1 tells him he is still wearing condoms, which causes Ray and Safaree to yell out a “whatttt?!” bellow. Ray asks him why he can’t pull out. He shares with them how he and Princess have been trying hard and it is not happening. He confides that he is beginning to think he is the problem and somehow that leads to him having a genius idea that they should go to the fertility clinic and see who has the highest sperm count and whoever loses has to feature Hazel in a song. Ouch.

Booby – it just occurred to me that this man’s name is Booby. Like Boobs. Anyways, he tells us about his rehabbing knee and how he has been dependent on his friend, Brooke who happens to be around to hand him a towel. She immediately lets us know that it is nothing like that with them and they are just friends that go way back. She says she stopped by to talk to him about what is going on and she reminds him to not be so focused on basketball that he forgets about the music.  She tells him about what is going on with Marcus and asks about Keyshia and he somehow says he is looking for someone like her and she says that’s funny cuz when her girls ask her what kind of guy she wants she says someone like Booby. She follows up by telling us that she knows he wasn’t perfect in the fidelity area with Keyshia but that’s the homie and he has a heart of gold and knows how to treat a woman. Oh ok.

The Evil Trio are on the beach with Moniece’s son and her girlfriend, AD. Oh I missed irrelevant Nia. I just don’t understand why Nia is still on this show. They bring up the antics at Karaoke night. Masika gets highly irritated and walks away saying she is not going to talk about that bitch.

Brooke meets up with Marcus and spins his yarns. He hands her a package and says this is a fresh start. The package was his divorce papers. They kiss and make up. Keyshia meets up with Too Short for a drink and he asks what the situation is and she says that they are good co parents but are not good together and she asks him if he has anyone to hook her up with. Keyshia says she is content with their situation and he asks how it works with them living together and officially married but not in a relationship. Alexis Skyy and Zell somehow make up?

We are introduced to Chanel West Coast at her single release party looking like a budget Fergie stuck in the 90’s. Nickie is there supporting and lets us know her brother took Chanel to prom. Nickie tells her that she has no idea she was in the music business and Chanel shares that it has been a struggle for her. Lyrica asked her what her plan is and she says she wants a Grammy. k. Jade is also in the picture. You might remember Jade as Rich’s girlfriend for 5 minutes before Moniece broke that up. She tells them she is seeing someone new. Someone technically married but she is helping him get a divorce. Of course that person is Marcus.

Safaree is with Nicki acting a fool when Chanel, once again dressed like a clown, walks in at Nicki’s invitation for him to help her with her career. He invites them to his coconut oil party. Yup, you read right. Lyrica meets up with Brooke at a dance class with Nia attaching per usual. She breaks the news about Jade and Marcus. Brooke tears up and asks who she is. She says there has to be more to the story and she needs to speak to Jade first. Nia says Jade is best friends with Chanel and they’re going to be at Safaree’s party so they can confront her there.

Larry, Curly and Moe go get their sperm results. The doctor reveals that A1 has the highest sperm count. I really thought it’d be Safaree. But he came second and Ray comes last. The doctor says that Ray comes in at 9 million when 15 million is the bench mark. Doctor suggests some lifestyle modifications like no smoking. Safaree makes a funny by suggesting Ray’s song with Hazel be called “Short Comings”

Zell hypes himself up and tells us he is lit. He is with Masika and stutters as he brings up Alexis Skyy, before he can even finish his sentence, Masika gets angry again and goes off on the crew and the camera men that she will call her lawyers. She goes off on Zell and says that she is not giving him camera time. Me thinks the lady doth protest too much.

A Show You Should Be Watching - Last Chance U