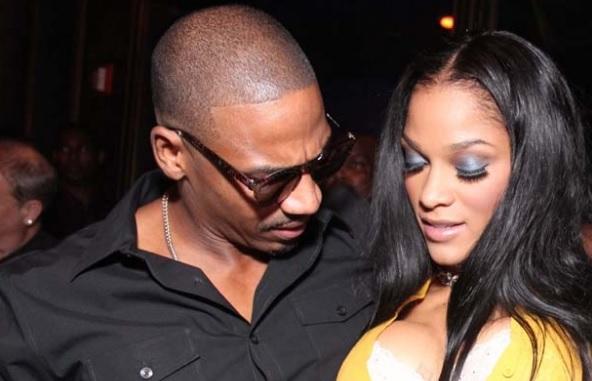 Unfortunately, the show starts with Mimi and Creepo, who tells Mimi about his run in with Stevie. He also tells her that he told him about their deal. Because new money people don’t know how to act, she says she’ll be damned if she wrecks her “new car” because she is getting into it with Nikko, so she parks her car to address him. She starts ripping into him about telling know how Stevie will use this to his advantage and Nikko, really feeling cool with himself keeps saying she has nothing to worry about. This idiot really thinks that he is some cool cat. Mimi kicks him out and he refuses and says he wants her to enjoy her “new car”. They get into a scream fest – more Mimi and zzzzzz….honestly I am tired of this woman.

Because they like candles so much on this show, Erica P (Scrappy’s friend) has a thousand of them in her apartment that lets Scrappy wonder if they are about to have prayer or have sex. Then Erica tells us that she’s not sure why Scrappy is acting brand new when he has been sending her texts in the middle of the night and now he gets the invitation and he’s backing out. Scrappy says he just texted her to get advice and he is trying to do better and think with his head and not his “hizzay”. The convo takes a left turn and somehow Erica is asking Scrappy if he could love someone like her? (whaaa?). Oh and he also tells her she is a burriful person. We see Stevie unpacking boxes and pulling out the Versace. Stevie tells Joselyn about his run in with Nikko and Joselyn says firs she was Molly the Maid and now she is Madam the porn star, either way she is still servicing people. I love this babe lol. Joselyn says she is done talking about her and Stevie says that they need to get ready for dinner with Benzino and his new girl.

We meet original Erica’s boyfriend O’shea on a double date with Joc and Karlie. Not sure why his first name is an irish last name but dude took off his shirt at the bowling alley with a hat that said “O’shea the model”. Erica tells us he doesn’t drink or smoke and theres no drama. Karli tells Erica that O’shea should give Joc pointers to working out. I dunno, Karlie was suspect with her comments. Now the funny part is that Erica’s boo tells Karlie and Joc that they got the bill and not to worry. After they leave, he asks Erica for her card and has the audacity to tell the waiter that he wants to close HIS tab. Okay. Red flag. So we see Rasheeda working out with a full face of makeup saying she is trying to clear her head up. She gets home and Kirk is ragging on her for being away longer than usual. And carries it over to her not working because she needs to take care of their son. They bring up hiring a nanny and Kirk says he wants a nanny that’s younger that can facetime. I can’t with this guy.

We see Bambi at a drug store who has a gut feeling that she is pregnant and is buying a pregnancy test. Kirk is catching up with Scrappy and telling him how he is emotionally scarred and how we have to take women’s word for who the father of their children is. Anyhue, Scrappy tells Kirk that Bambi is pregnant. Scrappy asks if Kirk or Benzino – it was bleeped out so I don’t know for sure – if they smashed Bambi. Karli and Joc are at a coffee shop and Karlie is being the usual jealous gf and tasking him about some girl and clearly he knows his woman well because he switches straight to music and having a record for her and she is suddenly smily face. Mimi and Stevie meet up. He wants to know where she moved to without telling him. Stevie asks why she let the first sucker that comes around put out a sex tape. He tells her that Nikko leaked the tape and Mimi said it’s not true. He also tells her that he can have her when he wants to. Mimi tells him that he sounds like a man who made the wrong decision and is regretting it. Mama D says that its hard to go from a Grassling wildebeest to the bear in the woods. Sigh. Scrappy asks his mom if she has been taking her meds because she looks calm. I don’t know if she has because she starts rattling off things Bambi needs to do for the pregnancy since she is carrying the heir to her throne. Stevie in a Studio 54 bling tank top opens the door for Benzino and his girl. We learn that she was signed to Def Jam and had a big check. We learn that they met through twitter, he dm’d her. Oh wait, he called it Direct Muah. Somehow over dinner they come up with the idea to open up a restaurant.

Kirk and benzino are together and he says he has the test results in his hands. Their waitress brings them shots and he tells her to read the results to them. Benzino says its ridiculous and decides to read it. Turns out Kirk is in fact Carter’s father. The VH1 hired waitress comes up again and he tips her very well. Benzino tells him he can’t take the paternity test home and burns it. Again, Karlie Redd is on with Jeremih and flirting with him. This desperate woman is all up on him and says its because she’s not sure what Joc is up to. Joc starts asking her whats up with Jeremih since they were up close and personal. It turns into a full blown argument with Joc calling her stupid and her telling him how she’s put up with his cheating.

Look of the Day - Cate Blanchett