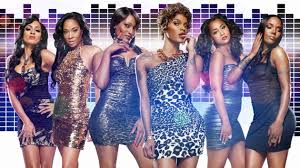 We start the script with Benzino, who has the bright idea to set up a meeting with Stevie, Mimi and Dawn. Before the ladies arrive, Benzino asks Stevie again if they are married. We see Mimi in the confessional, talking like she is fighting herself as usual saying she is expecting a retraction – still not sure why she is so adamant about it. She reiterates about him sending her a text about a stunt to be pulled same day the magazine was published. Stevie says what we all think and wonders why Mimi cares this much. Dawn goes on about how the marriage is public through the government, Stevie in all seriousness says “He’s a sovereign” and he is his own government. Benzino says that he believes Stevie. Mimi says she has one question and asks Stevie when he got married. Stevie says July 29 *pause* June 29. Mimi says she has to go. Momma D is on and Erica P or as momma d calls her “one of scrappy’s eggs”, slo mo’s on the screen to meet with momma d. Momma D proceeds to tell her what she did wrong by mentioning the fight in the club and asks her what her relationship with Scrappy is. Erica P starts going on about some man that is apparently Scrappy but doesn’t sound like him. She goes further and says “A king should not be with a peasant”. I should note that Momma D calls her “The Bambi” and California – California-ay. Erica P starts to show and tell momma d all the inappropriate texts that Scrappy had sent her. Momma D finally accepts that her son has been “scrambling his eggs” and a sit down is required.

Rasheeda is doing a shoot for Sister 2 Sister magazine with their sons – with her mom (Can I just say how pretty Rasheeda is). Anyways, Rasheeda’s mom I have to say is out of line by calling Kirk a “raggedy ass” in front of his sons. Kirk says this is why they need a nanny. She brings up him telling people that they are separated and Kirk asks her where her ring is as she is not wearing it. They continue arguing at the family photo-shoot and Rasheeda’s mom continues to disrespect and rag on Kirk. Joselyn and Stevie are having date night and chit chatting. She tells Stevie how Tammi annoys her, she moves on and continues to praise Stevie and thank him for everything. Stevie gets up and gives her a very tongue-y kiss. Dry couple Tammy and Waka are chilling as she brings him fruit. She tells her version of the situation with her and she still remains hopeful that they’ll work things over. Waka seems over it and tells her to give him a kiss. YAWN! Sigh, the tired Mimi and Dawn meet up again and Dawn claims she has some business opportunity for her. Mimi continues her chant and says that she is not a porn star and the tape was a onetime thing. Dawn says she can help her and can create avenues for her.

Nikko the irritant is on my screen – eew. He brings Mimi breakfast in bed to celebrate their one year anniversary and they discuss her meeting with Dawn. Nikko tells her he wants to throw them an anniversary party. Meh.  We move on to The Bambi, Erica P and Momma D as we watch a man make an empanada. Momma D tries to make peace and before she can get a word out, Erica P rises up like a tidal wave and slams or tries to slam Bambi. Why are these people so uncouth? Security steps in and carries Erica out once again as she asks for them to retrieve her red bottoms. Bambi is so pissed she couldn’t be calmed down by Momma D, she tells her she doesn’t even care about Scrappy anymore and walks out. Joselyn is at her photo-shoot and Stevie asks Joselyn how Mimi knew about the photo-shoot and she says she only told him and Tammy so she hopes Tammy didn’t blab. She gets all worked up as Benzino looks frustrated. Stevie tells her not to get her panties in a bunch over them. I like these two together.

Rasheeda is in the studio with her handbag, Kalena. She isn’t getting her rhymes right and she goes to talk to Kalena and she tells her how everything with Kirk is affecting her. She tells us she believes Rasheeda and Kirk needs time apart and suggests that they take a trip. She suggests going for Mardi Gras. Bambi calls Momma D – to talk of course. She says she wants to know where Momma D stands and she thought they were making head way. Bambi says that she feels betrayed. She says that Scrappy and his mom are creating problems in her life and she doesn’t need this. Joselyn meets with Tammy or as Joselyn says she thinks they are here to “chi-cheh” (chit chat). Joselyn checks Tammy about her telling her business and Tammy immediately gets on the defensive. Joselyn says she does not like bitches because they can’t handle her personality.  Joselyn calls her out and said she was fine till she had to go talk to her friends and suddenly she feels some type of way. Tammy continues to yell and scream like a child playing dress up and Joselyn walks out, first telling her to learn how to stop straddling the fence because it’s not good for her. As she drives away, Tammy continues to yell and scream about how Joselyn is a prostitute and stripper and ho *face palm*