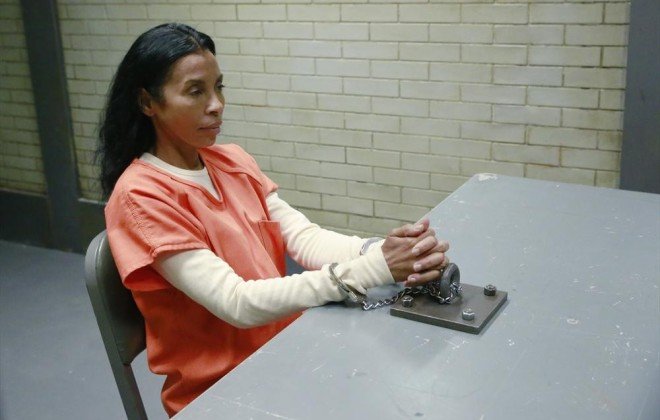 The last time we saw Olivia, she was on a private jet with Ian to parts unknown where she would be sold on a cyber “dark net” auction block to the highest bidder. This is most probably my least liked Scandal storyline so far and I am ready for it to be over. With the bidding about to start, Olivia and Ian discuss how much they think she will be worth on the black market. Olivia believes she will garner more than the $500 million suggested by Ian. She assures him that she was sure to command “not a dollar less than a billion” which probably made Ian a very excited man.  Unfortunately, that excitement was short lived as Gus, the prison guard Olivia went postal on during her escape, put a bullet in his brain. I mean, we all saw that coming as Gus was acting belligerently and was having some sort of episode. Oh well, good-bye Ian.

While the White House and the CIA worked on an extraction plan for Liv – Huck, Jake and Quinn decided to get in on the bidding themselves but they quickly realized they don’t have the funds to even be considered, that is until Huck mentions the $2 billion in “back pay” he funneled from B613. Now that they had the funds, they needed the underworld connection to get in. Enter… Mama Pope who gives them an in, in the form of Marie Wallace, the name she goes by in those circles. But in order for them to get an invite to the bidding, Huck will have to eliminate some henchmen. This leads to Huck channeling his inner Sweeney Todd. When Jake saw what Huck has done, he becomes worried that Huck is slipping into darkness and shares his fears with Quinn who dismisses his fears and tells him Huck is going to be fine.

Meanwhile at the White House, Cyrus and Fitz were busy terminating all of Fitz’s security detail and replacing them with the SEALs. And since they also had information implicating Andrew in Olivia’s kidnapping and the subsequent war in west-Angola, they gave him his walking papers. I guess they underestimated how trashy and low down the VP was because he confronted Mellie about his forced resignation and told her if he goes down, she goes down with him. He promised to spill all in regards to their affair. Mellie breaks the news to Fitz and they both realize that the best thing to do will be to let Andrew just slip away like the rat that he is. Also, Mellie finally confirmed to all of us that her main goal all along was to become President of the United States. Color me surprised Mellie!

In case you were wondering were Abby fits into all this, the episode opened with her calling Olivia and receiving no response. This worries her, so she decides to go over to her apartment where she finds it in a state of disarray including red wine on her couch. Sacre bleu!  She asks the Gladiators about this and Huck tells her she is not a gladiator anymore. This automatically lets her know that something is wrong. While in a briefing with Fitz, she is distracted by her discovery and can’t seem to concentrate. Fitz notices this and asks her what’s wrong. She confesses to him that she is worried about Olivia and Fitz finally sits her down and shares the situation with her. After this revelation, she storms David Rosen’s office and asks him why he decided not to share this information with her. In the ultimate jerk move, David tells her she had no right to know. To which Abby gives him a verbal tongue-lashing and David has to comfort her. Nice going David.

The Gladiators finally get into the auction but its too late for them as all bidding was suspended. As it turns out Gus was offered cold hard cash for Olivia by…Iran. The White House realizes this and the Secretary of Defense, citing Olivia’s close relationship with the white house and all the knowledge that she has, tells the President the best line of action is to neutralize the threat. Fitz, angry at the suggestion says they must stop at nothing to get Olivia back alive.

Finally, we see Olivia been transported to the exchange site with a hood over her head. She is taken out of the car and about to be handed over to her new owner who is sitting in an SUV. I believe it is someone from her past. It could be her dad, or it could be Stephen from Season 1. I’ve heard some mumblings about him coming back to the show. On the flip, it could be someone totally unexpected as the buyer looked like a woman from next week’s previews. I hope this plot resolves itself next week because I am not feeling excited about it.