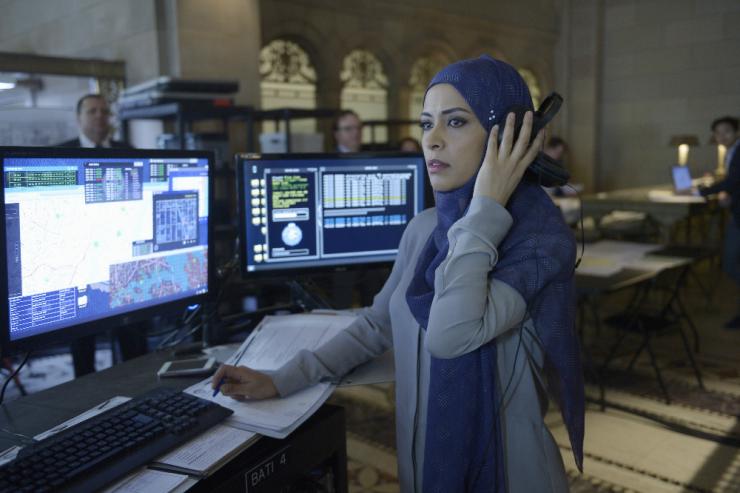 At Quantico, Simon is still in the doghouse following last week’s actions. Mostly everyone is pretty pissed at him including the instructors. At a hand-to-hand training session, though Nimah and Raina didn’t do what they were meant to do, he was the one punished by the instructor. When he was taking a shower after,  he got his towel stolen. He is still pretty unfazed because he believes he did the right thing. We also get to see some blueprints sticking out of his bag in his locker.

Back to the training exercise, Alex notices during a 2-to-1 combat that Natalie’s scar is fake, while Shelby thinks Caleb wants to dump her because he has been acting really weird with her. Alex asks Ryan (who is still around?) to help try and get info on Natalie. We see that Caleb has been acting weird with Shelby because he is under pressure from his dad about her real/fake sister. He plans to get proof that Shelby is innocent of all wrongdoing to get his dad off her case.

There is no case of the week this week. Miranda tells them instead they are going to help vet new incoming FBI trainees. This means they have to go over their lives with a fine-tooth comb. Nimah who is still really furious with Simon goes to ask Danny (hi hot guy), one of the people in the set before theirs who vetted him about his past details.

Caleb in his bid to get proof, goes to Shelby’s laptop and downloads information but gets caught by her. He tells her he’s doing it to protect her and get definite proof. Alex also gets caught with Natalie’s folder when she walks into the room. Natalie gets understandably angry but they are interrupted by an emergency session of the review board. This means bad news as it means one of the trainees might be getting sent home. Turns out one of the instructors also noticed Natalie’s fake scar during training and reported it. The session was called for her. She explains that it serves a reminder of the sacrifice she mad to come to Quantico. It involves her escaping an emotionally abusive relationship and giving herself the fake scar so as to get the judge to give her custody of her daughter.

The review board goes to deliberate and Nimah explodes that it should be Simon on trial. Apparently she found information that he was a war criminal. He insists he was a translator before confessing he was a “Honey trap” (LOL). He had no idea his platoon leader had started torturing the women he got close to. Ryan stands up for Simon by confessing he is an FBI agent. Eventually, the board agrees to let Natalie stay at Quantico but pushes Simon out because he had a fight with Ryan (a looong time ago). Shelby eventually agrees to let Caleb continue digging and ends up devastated when he proves her “sister” has been cat-fishing her.

In present time, Alex meets up with her friends after pleading guilty. Now that Liam believes he is not guilty, she gets to work the case and investigate the members of her class. She has negotiated immunity for all of them and everyone is happy to be together. The team (Alex, Liam, Miranda etc) believe they have just 24 hours to find the second bomb as they feel it’s connected to the Democratic National Convention (DNC). While the rest of the team eventually go off on other leads, Alex is pressurized by Miranda and Liam to also put surveillance on them. Alex resists initially because she feels they have proved their loyalty and innocence by helping her when she needed them the most, but she is eventually convinced to do it.

They get to see Raina kissing the leader of the terrorist cell at his hospital; Shelby and Caleb discussing Clayton and most importantly, they witness Simon meeting up with a bomb maker. Nimah walks in on them and knows they are spying. Eventually, all of them get to know they are being spied on and they raise hell as everything they did has been recorded into official transcripts and will be in their permanent records. Simon drops a bombshell however by saying he planned the Grand Central bombing.

He said as a way of making people wake up to what was going on in the country, he made plans for 2 bombs to be placed at a temple and a mosque. The plan though, was that the bombs would eventually not go off. His plans are for peace he says. He says he is going to go home and wait to be arrested for treason. Before he leaves though, he rails into Alex saying she has no loyalty, trust and all her team leave her which I guess takes her back to square one. The episode ends with someone kidnapping Simon at his house.

Okay, I understand we must get drama but I don’t see how it makes any logical sense for Alex to be in charge of the surveillance of her team. It shouldn’t have been her call at all. Natalie still does absolutely nothing for me. Even her backstory didn’t make her more interesting to me. Also, Simon’s plan is one of the dumbest I have heard and I know he’s smarter than that. I just wish they could be a bit smarter about introducing plotlines sometimes