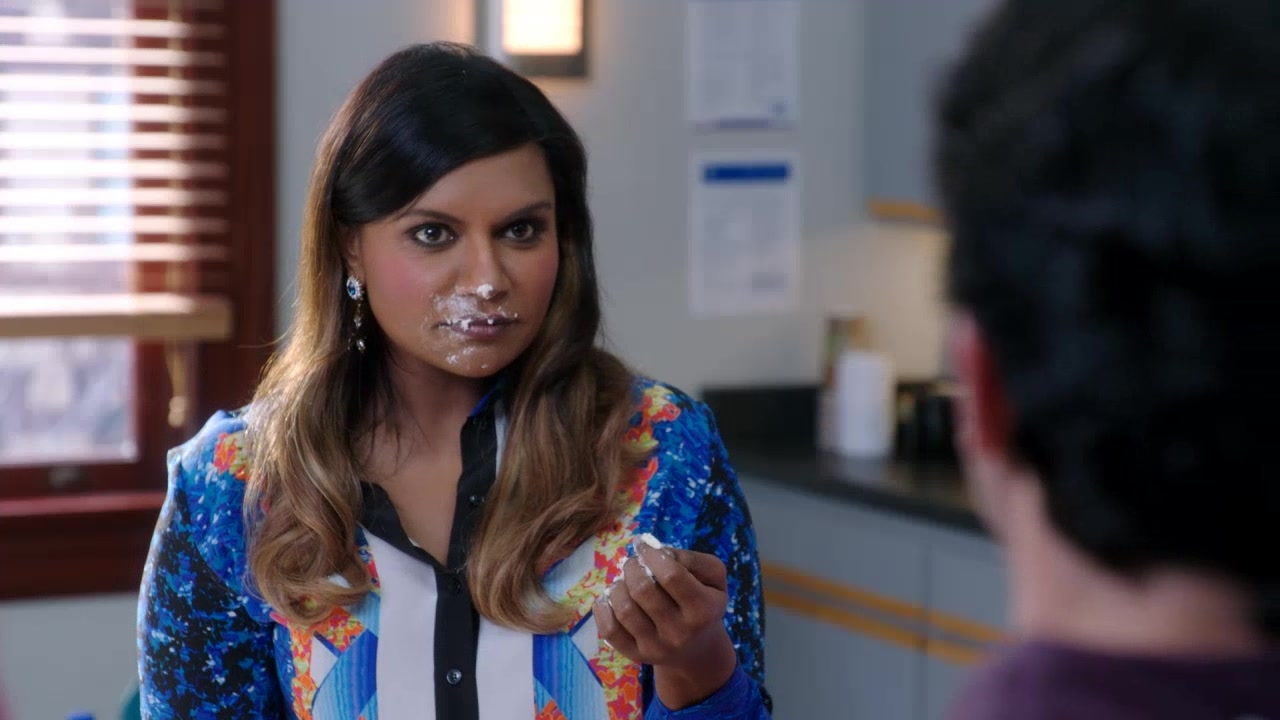 Mindy is openly pregnant and starting to experience the joys of it, including morning sickness. She gets it all the time, when she tries to get busy with Danny and when Morgan shows off his new red fedora. But the latter was probably just the hat as “the lady at the hat store said the same thing,” according to a disappointed Morgan. Morgan makes Mindy a bedazzle bucket so that she can use it instead of vomiting in random places.

Danny gets on Mindy’s case about eating healthier and being prepared for when the baby comes. He makes her a bowl of oatmeal, to which Mindy replies “I don’t need no bowl of oatmeals..I have been eating for two my entire life and now I actually have an excuse, I’m not gonna waste it on steel-cut oats.” And she brings up his smoking habit to deflect from her eating. He says he quit cold turkey, then hands her a plate of cold turkey.

The practice is looking for a new doctor since Peter left and Mindy is starting her fertility clinic. While attempting to put donuts on each of her fingers, she is recognized by her old professor Dr. Phillips, guest star Vanessa Williams. Dr. Phillips is bored in retirement so Mindy offers her the position. When she gets to the office there are a bunch of similar old white men waiting to be interviewed in the conference room where Beverly locks herself when she needs to be racist. One of the waiting doctors gets upset as he came all the way from North Philly to interview. But Mindy sends them all home anyway.

Since Peter is Mindy’s doctor, they do a checkup via Skype. Peter says that Mindy falls into the “geriatric obese pregnancy” category because of her age and weight, and puts Danny in charge of her diet.

Dr. Phillips comes in to meet Danny and Jeremy and they abruptly scare her off with how much work they say it will be, and Morgan being Morgan.

Danny makes Mindy a healthy lunch of what she calls white steak and green curd, bland chicken and spinach. He offers her Yogi Barra quotes instead of dessert. Just then Tamra walks in with a huge birthday cake for her birthday. Mindy says she can give up the cake since Danny gave up smoking. When Dr. Phillips texts her that she won’t be joining the practice, Mindy breaks down and eats the cake. Danny catches her and tells her she has no will power. Later she catches him chain smoking  in the courtyard.

Danny apologizes for lying, that he tried painting, but he kept painting his “own tombstone. and it was bumming everybody out.” Mindy calls him a hypocrite and Tamra shoots him with a BB gun.

Mindy says she will start eating healthy when Danny gives up smoking. Jeremy punishes Danny by making him do all of Peter’s deliveries for a month. To the tune of Britney Spears’ “Work Bitch,” Danny stops smoking for two weeks. Surprised, Mindy doesn’t want to start eating healthy, Danny tells her that her unhealthy eating is causing her morning sickness. She starts crying and saying how scared she is about the pregnancy. Then she runs to find her bucket but is blocked by the old angry doctor from before. Since he won’t let her get by, she ends up throwing up on him.

Instead of being mad at her, the old doctor sits her down and checks her out. Danny tells him that she is having morning sickness because of her poor diet, but Dr. Bergdahl disagrees saying that he believes that it is actually stressed induced morning sickness. He tells Danny that he thinks he is the cause of her stress, that Danny should cut her some slack because he is going to need her. Impressed by Dr. Bergdahl, Danny offers him the job on the spot.

Both Danny and Mindy admit that they have been hard on each other because they need each other so much. Then Mindy embraces her bedazzled barf bucket.

All 12 of Tracee Ellis-Ross’s Looks At The AMAs