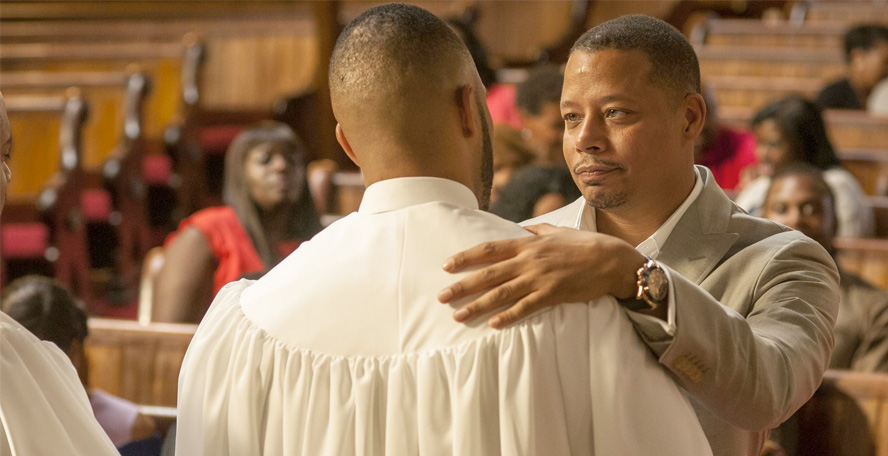 This week on Empire, we open with all charges against Lucious being dropped. He celebrates by releasing a cell phone shot video telling everybody to “kiss [his] ass”. Never change Lucious.

Andre has been welcomed back into the fold and he’s been put in charge of Empire’s ‘Gutter Life’ offshoot label. Gutter Life will house Empire’s more “raw” talents and this means that he’ll be in charge of putting out Freda Gatz’s album. Lucky him…. He decides to compound his fresh start and new lease on life by getting baptized. After a visit with his pastor Reverend Pryce, he is encouraged to confess his sins to all his loved ones before his baptism.

Additionally, there’s an odd scene with him and Rhonda where she attempts to initiate sex because they apparently haven’t slept together in a long time. Andre rebuffs her and the camera lingers on her with a troubled look on her face. Now this being Empire, I’m inclined to think that Rhonda is either no longer pregnant/ was never pregnant in the first place and she’s attempting to get pregnant for real very quickly. This is purely conjecture but I’ll be keeping a close eye on this storyline.

Hakeem brings his new protégé, Laura into the Lyon Dynasty fold and it’s immediately clear that she’s far too wholesome to hang with the Lyons (and Tiana). Speaking of Tiana, she’s the victim of a robbery by two aesthetically challenged young ladies as she’s leaving the offices of Lyon Dynasty. They make off with her bag and all its contents and they immediately put up a YouTube video letting everybody at Lyon Dynasty know that they can’t just set up offices in the hood without expecting to pay some kind of tax.

This propels Cookie to meet with promoter, Delgado (played by C.S.I Miami’s, Adam Rodriguez) who lets her know that he’s willing to do anything to promote Lyon Dynasty artists, in addition to keeping them safe. In his words, “[he’s] not afraid to get [his] hands dirty”. The subtext that he’s also willing to get dirty with Cookie is very loud and clear in this scene and I most definitely would not be mad if this happened.

Meanwhile Hakeem puts the moves on new signee, Laura and she immediately rebuffs him. She lets him know that she’s “not one of those girls” and leaves. She makes Hakeem work to get her back in the fold and his apology just cements my view that Hakeem is by far the best Lyon brother this season.

Lucious hires his lawyer, Thirsty to replace Vernon and this immediately puts him at odds with Andre. Thirsty makes himself a little too comfortable in Lucious’ office in his absence and Andre quickly gets him together. Andre also refuses to steal Cookie’s master tapes and Thirsty happily takes on the task.

Cookie is in yet another meeting with Delgado when they foil two goons sent by Thirsty to steal her masters. They both pull out guns when faced with the intrusion and Cookie lets them know that she’s not here to play games.

Andre is on his “confessing my sins tour” and admits to his brothers that he was the one who set up Jamal’s robbery back in season 1. He also admits to Lucious that he was the one who persuaded Cookie to blackmail him and that he also tried to kill himself in Lucious’ studio. He invites them all to his baptism and surprisingly they all (yes, even Lucious) show up. However, being in such a holy place is clearly too much for Lucious to handle and after treating us to some more flashbacks of his mother’s mental illness, he walks out before the baptism is even over.

The episode ends with my new favorite Lyon Hakeem being kidnapped while on his morning run. He’s thrown in the back of a van and we’re left with no idea of what will become of my new fave.

The next episode cannot come soon enough but since there’s a forced hiatus due to the World Series, looks like I’ll have to exercise some patience.