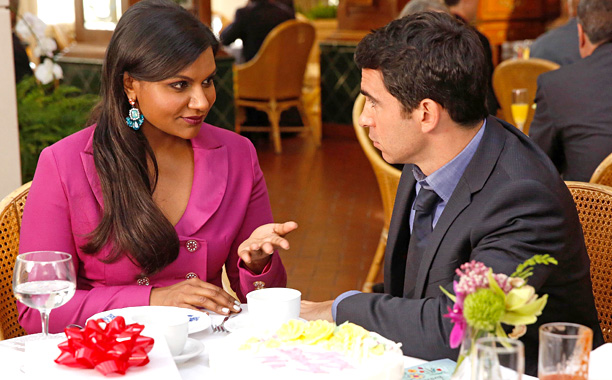 Judging by Danny’s personality and relationship with his father, you would probably expect his mother to be a sweet lady who dotes on her son. Or a strong, independent woman with a job at like Shotz Brewery to make ends meet but… she actually cleaned hotel rooms. Turns out she is a combination of the two, and Rhea Perlman is what that combination would be.

Instead of meeting Danny’s mother during a nice dinner or lunch, Mrs. Castellano stops by Danny’s place unannounced. Before Danny can interject, his mother invites Mindy to Staten Island and Mindy accepts. After his mother leaves, Mindy is happy that his mother loves her. But Danny sets her straight, “she thinks you’re my cleaning lady.” Mindy gets upset and despite Danny telling her that his mother hasn’t liked any of his past girlfriends, Mindy still wants to meet her and execute her “four point mom catching plan.”

When Mrs. Castellano stops by the office, Danny summons the courage to introduce her to Mindy, and she apologizes for thinking she was a maid. After she reveals that it’s her birthday the next day, Mrs. Castellano invites Mindy to her birthday brunch. But Danny clearly made sure the brunch was scheduled at the same time Mindy had a surgery. So what does Mindy do? Show up anyway. In true Mindy fashion.

Mindy is determined to win over Danny’s mother, and puts her plan into motion. Step 1: compliment her. Step 2: common ground; she basically pretends to be into Castle cause that’s the only show his mother watches. Step 3: come bearing gifts; she gives Mrs. Castellano a “Here Comes Trouble” and Mrs. Castellano’s friend a “I’m Trouble” shirt. They think it’s adorable. Step 4: agree with everything she says. From the temperature in the room, to “[hating] that ethnic group too,” even calling Michael Fassbender a perv, Mindy agrees with everything. And it worked, Mrs. Castellano said she liked her. Not for long though.

Back to the birthday brunch, Danny gives his mother her birthday present, a brand new stove. His mother says she can’t accept it because it’s too much. When Danny says the guy already installed it, Dottie, Mrs. Castellano’s friend, comments that the guy now knows the layout of the house, and “that is how elder rape occurs.” Then Richie gives her his present. A teddy bear he got from the airport…And Mrs. Castellano loves it, showing somewhat of a bias towards Richie.

This is when Mindy torches her whole four point plan. Instead of agreeing with Danny’s mother that the stove was too much, Mindy says “if he was my son I would be incredibly proud.” Going on to mention how much Danny does for his mother. Which sends Mrs. Castellano into a tizzy, explaining about why she needs Danny’s help. Her bills, QVC addiction,  and how hard level forty four of her “Coffee Crunch” game is. And finally storming out of the restaurant, but not before telling Mindy she doesn’t like her.

Even though Danny thinks “the whole thing will blow over in five to ten years,” Mindy can’t wait that long. She tries calling Mrs. Castellano but gets voicemail, “Annette can’t come to the phone because I’ve gone back to work, cleaning hotel rooms as to not burden my son.” Mindy sneaks out and heads to Staten Island.

Meanwhile, Peter tells Morgan to stand up to Tamra about making him change. Unfortunately, Tamra is allergic to dogs, so Morgan has to find a home for all FORTY of them. Peter thinks Tamra is lying to manipulate Morgan. Motgan decides to have a Dog Fair to find homes for his dogs. A cute little girl wants one of his dogs, but he just can’t let go. Peter can’t bear to see Morgan give up his dog, so he takes the dog and runs up to the office to prove Tamra was lying about being allergic. Tamra immediately has a reaction, flailing, asking “why are you trying to kill me Dr. P?” Hilarious!

Back to Mindy’s quest. She tracked down Mrs. Castellano down at a hotel, where she finds her lying on the floor. She had tried lifting a comforter and popped her hip out.  Against Mrs. Castellano’s wishes, Mindy attempts to pop her hip back in. Danny’s mother screams out “your hand is on my pubis….ELDER RAPE.” Dottie would have had a field day if she was there. After the break, Mindy gets tough with Danny’s mother, they make up, and Mindy finishes cleaning the hotel rooms for her.

Meanwhile, Tamra survives and lets Morgan keep his dogs, and Peter admits he wasn’t trusting women at the moment because of the whole Jeremy-Lauren situation. Morgan gives Peter one of his dogs, and all is resolved in this storyline.

Over dinner, Mrs. Castellano subtly shows Danny some love by telling him, “this new stove, I like how quiet the fan is.” The episode ends with Mindy and Danny hanging out in his teenage bedroom, listening to his old records. The song playing was “Strange Magic” by Electric Light Orchestra; a quintessential 70’s song. Things get a little frisky and Mrs. Castellano unexpectedly comes in. Shocked she asks “are you arousing my son in my own house? A boy’s bedroom should never have an erection in it.”

Maybe every episode will end with a classic song and some sort of sexual component. More Danny stripping please!