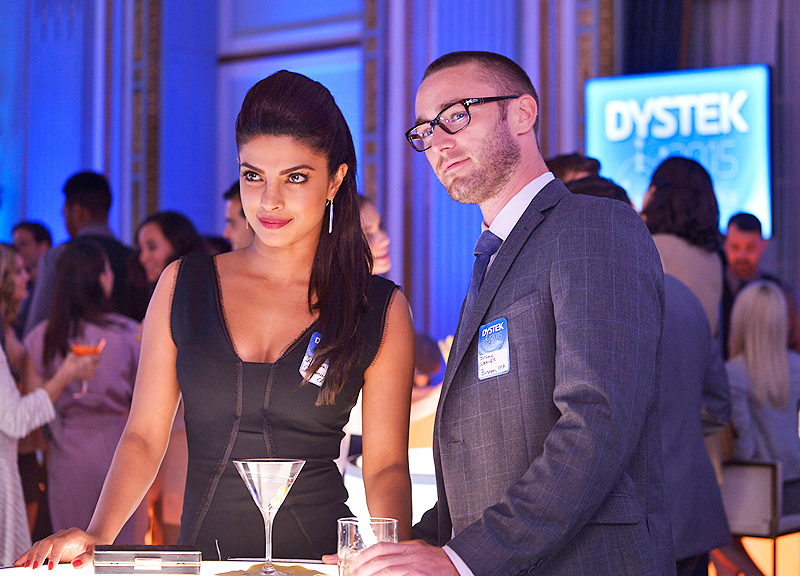 The training lesson this week is to create a secret identity so as to be able to go undercover on assignments. If they do well, they will be allowed to infiltrate a company outside Quantico. This comes as a welcome relief to the trainees who have been feeling the pressure of training.  Alex has been arguing with her mum every night, Nimah/Raina having trouble keeping to their switching schedule, Caleb is angry with Shelby because he thinks she told on him using firearms and Elias has been even more stalker-ish. They all create personas complete with new backstories and get taken to the field. Before they start their assignment however (which is to infiltrate a company called Dystek), Liam tells them to switch their identities with the person next to them.

At the party, Caleb and Elias show up, as they were also told to mingle. Caleb takes the opportunity to mess up all of Shelby’s moves. Elias also observes that Simon invited Max and by stalking Simon, he confirms that Max is his fake boyfriend. Nimah/Raina turn out to have the most important mission as they have to switch every hour without anyone noticing they are the same person. The stakes are even higher for them, as failure for them would result in both of them being kicked out of the program. They manage to do so successfully and get the closest to meeting the CEO along with Ryan and Alex. In another part of the hotel, Miranda confronts Liam about using Ryan for an off the book job and Liam tells her the reason which we are not privy to yet. Shelby and Caleb hook up and so do Alex and Ryan in a very seductive scene. Elias confronts Simon about being gay and says he is going to report him once they get back to Quantico and get him kicked out.

Back at Quantico, Miranda tells Ryan that Liam had a valid reason for having the surveillance on Alex but doesn’t go into details. She also gets a call that her son has been paroled. Simon goes to Elias and tells him “convincingly” that he was with the Israeli Special Forces and the only way he can handle himself now is by living a lie basically. Elias is convinced and even tells him to keep wearing his glasses. Nimah/Raina apparently also likes Simon and has plans to get him. It helps that the feeling seems to be reciprocated. Shelby and Caleb also continue having hate sex.

In the present day, Alex’s news has been all over the media. She’s been called different names like “Jihadi Jane”. She still has Shelby and decides to tell her side of the story by contacting the Dark Web. A group called The Unknown contacts her.  After questioning her to determine her innocence, they interview her and broadcast it live. Her location is discovered by the FBI who rush there only to discover it is a mosque. We find out this was a carefully chosen location because by the time the FBI comes over, it is right after prayer time. As expected, they evacuate the mosque, except they forgot that some Muslim women wear burkas – which of course Alex was wearing and is able to escape wearing one. During Shelby’s debriefing she decided to leave out the fact that Simon and Ryan are working with Alex. She tells them it’s because she believes she is innocent. The 3 of them look at the list of agents working the area and discover that Caleb was there when he wasn’t meant to be and that’s where the episode ended.

Can I just say… Caleb and Shelby. Urgh. Caleb is so annoying and honestly, they have no chemistry. At least, not like Alex and Ryan . I had no idea Miranda and Liam’s relationship had been that serious to the point of actually contemplating leaving their spouses back then. Elias is actually the most annoying person on the show and not as smart as he thinks he is. I still don’t completely buy Simon’s story and I am surprised he accepted it after all his stalking and pouting. So back to Caleb; Who is he exactly? How will a Simon and Nimah/Raina relationship work? Finally, there was no Natalie this episode and that made me quite happy.

My Guilty Pleasure - Are You The One

Best and Worst of the 2017 Grammy Awards Red Carpet