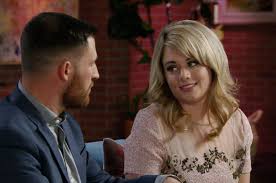 The #Marriedatfirstsight reunion was last night and it was more entertaining than it has been the last few seasons. A few changes were made for example, it wasn’t hosted by the whack ass experts who handle these people with kiddie gloves and it was hosted by charismatic Kevin Frasier, who seems to have taken up hosting Lifetime show reunions. He has no stake so he is able to dig in and ask questions they’d otherwise skirt around. Also, after speaking with the couples individually, they stuck to putting them all in the same room. They had stopped that a few seasons ago.

Let’s talk about these couples:

Now here was my issue. This was Pastor Cal on twitter last night:

I saw red. I responded to him with my red (Which Jamie Otis from season 1 liked so now I am wondering if she has been vocal about her disapproval of how they handled it). For one, don’t praise her for going through an emotional situation you put her in and didn’t remove her from. Also, they could have seen this. Kate’s cousin did a quick search and found his sexual preference on Facebook. So what are the show’s background searches doing? Same way they missed Mia’s arrest record last season? Why was he so flippant also??!!!

They absolutely should have voted her out of the marriage because abuse is abuse. If he was physically hitting her, wouldn’t they have pulled her out. There are things that leave scars on you and are hard to heal. We saw Kate walking around miserable. We saw her cry and be scared. We saw him constantly accuse her of having a drinking problem even as he bought her wine. We saw him have sex with her and tell her he is dead inside and recoiled and CONTINUED to have sex with her. Livid is what I am. The experts were absolutely negligent and useless as usual.

He proceeded to say save for physical abuse you should stick it out in marriage. What a dangerous message! I don’t even know why I am heating up. This is a show where one of the experts is currently dating one of the participants of the experiment. What am I expecting?

Well that was it for this season. Next season returns on Wednesdays in June and will be based in North Carolina. Looks like this show will keep going for a while because a friend of mine saw audition flyers for Washington D.C. I may rant and rave but I am sure I will be watching.

Let me know what you thought!

My Thoughts On "Little"

New Cast of Dancing With the Stars – Season 18