Home > TV > A Lil’ Something on #Married2Med S5 Premiere 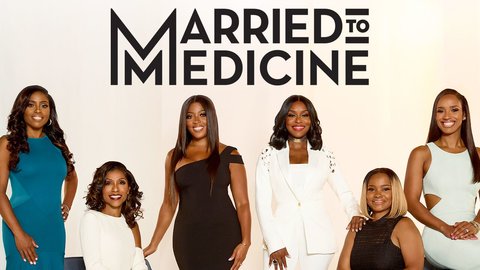 5 years ago, the reality show White House aka Bravo, gifted us with yet another show based in Atlanta. The premise for this was a little different as it was a show following women who were either doctors or married to doctors. 5 years later, some cast changes later (which includes a pseudo ousting of the show creator and queen bee, Maria Huqq) and a spin off (Married to Medicine Houston) the show is still trucking and as entertaining as ever.

Sunday was the season 5 premiere and something about the episode compelled me to write about it. I really liked the episode perhaps because it felt like one of the rare times all characters involved were being themselves and not playing to/for the cameras. The whole episode was spun around the shocking revelation that Dr. Jackie’s husband, Curtis had cheated on her and the blogs had it all public. We knew the couple had issues last season and were seemingly trying to work through it.

Now cheating is a common theme in these shows – we’ve been subjected to allegations for years against Lisa Nicole’s husband – but it seemed like such a tragedy this time because it happened to beloved Dr. Jackie. Dr Jackie is just the most well mannered lady and has been through so much. Surviving breast cancer twice, losing her ability to have kids even though she wanted them and has to deliver kids everyday, she lost her dad last season also.

Curtis, her husband had been complaining that she was devoting way too much time to work and not enough to their relationship. A fair enough complaint, noone wants to feel lonely while in a relationship. And as Dr. Simone (Jackie’s best friend) pointed, a part of it could be filling that void of not having kids at home and avoiding the reminder at home. At the reunion she made a comment where she said “If I’m not making him happy then he deserves to find somebody who does”

The news of the cheating really rocked the wives. Toya expressed to her husband that she was having trust issues especially because he is now working long hours far away (they have tax debt they are trying to pay off but Toya getting a job doesn’t seem to be an option for some reason). Heavenly told her husband she woke up the next day and was just mad at her husband for no damn reason. To be honest, for someone who’d always acted like they were envious of Jackie, Heavenly really took this very personally. hmm.

Jackie made mention of how comments on the blog attacked her by saying that she chose her job over her husband and the rest of the cast especially their husbands save for Simone and Quad seemed to echo that sentiment. It was so bizarre. Quad’s husband was all it’s on Jackie to forgive him and make it work. My suspicion for Heavenly’s husband continued as he continued to spew nonsense. She asks him if he’ll ever cheat on her and instead of a no he says why are you asking me? He said Jackie should stay with him because it’s a win for Satan every time someone gets a divorce then turns around and says if Heavenly cheated he wouldn’t forgive her. whut?? talmbout men see pretty women everyday. And women see ogres??

Heavenly throws a release party for Jackie and as all the women are spewing their opinions Heavenly continues her taking this personally by saying if her husband ever cheated she would completely blame the woman because she would know her husband didn’t mean to do it. That someone who loves her that much wouldn’t do that to her. again whutt? I totally see the point of how Jackie neglected her marriage and put work first but that is no excuse for Curtis to cheat. As Quad said, just because something isn’t being fulfilled doesn’t provide a pass to cheat. You end one situation before entering another. Jackie calmly tells them that its easy to say what you will do until you are in the situation and as of right now she doesn’t know what she will do.

A few thoughts on the women:

Jackie – Sweet woman that’s a bit too straight laced but because of everything she has been through, it’s really hard to hate on her. She actually is a good sport and participates in the activities they come up with. I just always wish her all the good in life. Don’t get it twisted though, Dr. Jackie be throwing some nice jabs in her confessional.

Simone – I like Simone. She generally means well and is a great friend to Jackie. She has a short fuse and might not be as loving to her husband but they laugh a lot together. I don’t understand the two houses thing and she seems to be enjoying it a little too much.

Quad – I like Quad. I wish she would fix her wig situation because it bothers my eyes. She started out as a protegee and you can tell that she was a small town girl from the block who had big dreams. She has now fallen into money and is trying to be classy and make something of herself on her own. Ambitious lady. I don’t think Quad loves her husband. She tries everyday and hopes one day she will wake up in love with him but it’s a losing battle. Also, whenever someone is as hesitant as Quad is to have a baby with their partner, that’s a telling sign that they know something is up. I could be wrong though.

Heavenly – I don’t like this woman. I think she’s just a nasty person and yes, I do believe she is trying to be a better person but sometimes you can’t beat your core. I hate her relationship superiority and how she feels her relationship is better than the rest of the women.

Toya – Lol. Toya is such a diamond in the roughest. The woman is just not polished, says whatever she feels at the most inopportune time but the thing about her is what you see is what you get. I love her relationship with Eugene and they genuinely seem to like each other and are friends.

Mariah – Special mention on the lady who originally had the idea for this show but has been demoted as featured guest and not a full time cast member. She really was so nasty. So nasty there just was not any way to keep her on the show. Her energy is just bad, you can feel it radiate through the TV

I hate that the show was moved to Fridays because it totally deserves its original slot on Sundays after RHOA.