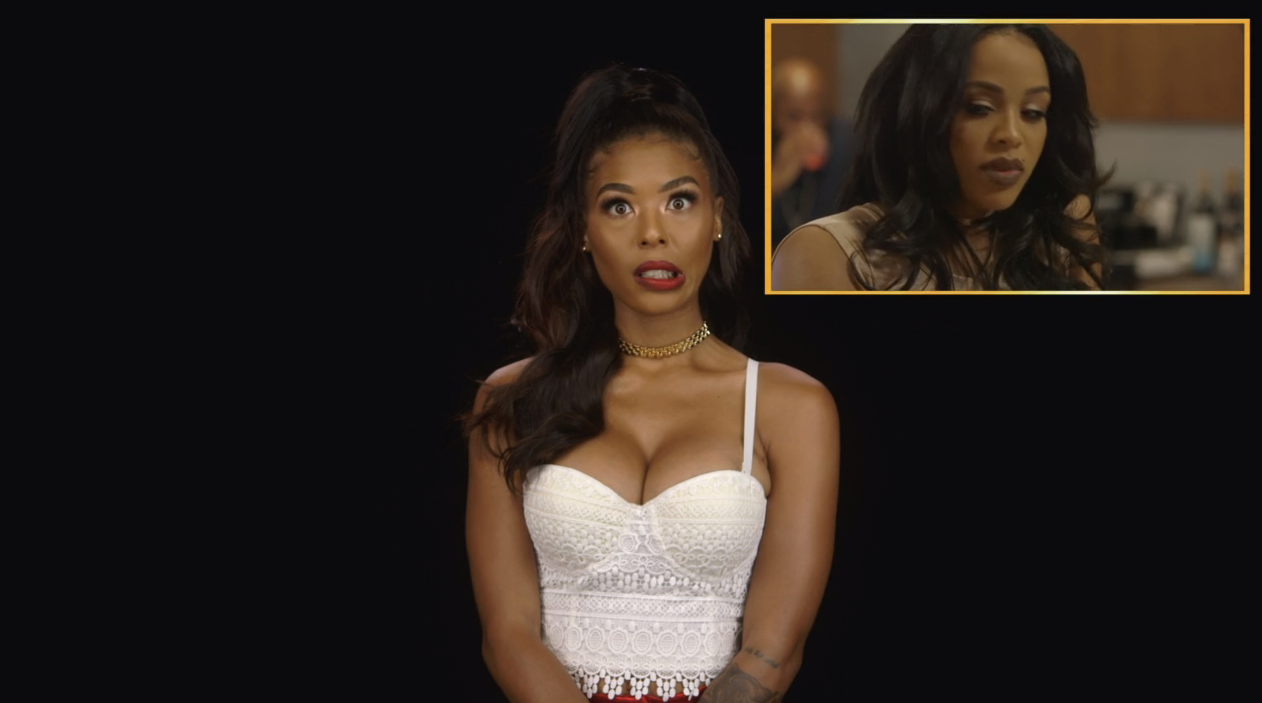 Princess, still looking snatched from head to toe finally makes an appearance this season and comes out with Ray to celebrate A1’s record label launch. Alexis Skyy comes with her boyfriend, something called Solo Lucci (he looks scary yo). Ray J tells us that Princess and Alexis have been bonding and she refuses a drink because she is being careful and missed her period which Alexis says she missed too. She is not sure if she ready for a baby since her relationship is new and Lucci has baby mama problems.

Lyrica’s mom stirs the pot by asking when Lyrica’s album will be done and launched and A1 tells her that they have to ride the wave of his. As he is listing all the members on his roster he mentions a female rapper and Lyrica tells him that they can’t sign any female rappers until her stuff is done.  Teairra tells us that she is in a great place and has a new man for 3 months. No other than lame-0, Cisco from LHHNY. They whisper fake love lyrics to each other and she suggests meeting her friends. Cisco says he is sure they will not like him.

Safaree’s Coconut Oil is launching and there is an anticipated performance by Chanel West Coast. She lipsyncs on stage to an auto tuned track as Brooke Valentine and Irrelevant Nia roll up to the event. Safaree says he is intrigued by her. Not quite sure why Brooke is mad at Jade but she rolls up on her and says they should chat. She confronts her and waves a feather in her face. Brooke continues playing stupid saying that she chats with his mom and their kids are getting to know each other. Jade tells her that she has known Marcus for 12 years and why isn’t she having a conversation with Marcus – which is true. Chanel gets krunk and stands up for Jade.

Moniece and Zell meet up with Nia and he updates them on his meeting with Alexis and how Masika reacted. Nia asks if they got the invite to meet up with Cisco and Moniece says she wants him to know her issues and if he is helping her with them. Nia encourages them to go in with open minds. Alexis meets up with her Man(tis) and asks him how he feels about her. He lets us know he never goes public with any woman but she is special. She tells him that she might be pregnant and Lucci is like that’s good but Alexis does not think that way and gets aggressive with him. She tells him to fix his baby mama situation.

Ray is paying up on his bet and is in the studio with Hazel and Safaree. They are actually impressed by Hazel’s lines and Cisco walked in. Safaree asks Ray J if he told Princess about his sperm situation and he was like he hasn’t. Hazel asks Safaree when they will work together and he tells her he is working with Chanel. Cisco tells them he is dating Teairra and Ray J is like they were terrible together but hopefully he is good for her. He tells them that he is meeting up with her friends and Ray is like she is a sweet girl but just needs someone to save her. Cisco seems confused by that statement.

A1 is taking a break with Marcus and they are smoking cigars. Marcus tells A1 that he just finalized his divorce and somehow Brooke knew the location and walked in. She tells A1 that he has to leave because they have to talk. Brooke asks about Jade and asks him to get Jade here right now. Jade shows up and I guess Brooke goes to hide and walks out with a mission. She tells Marcus to tell Jade who she is to him and he says that Brooke is the love of his life. Jade tells him she never expected him to do this and Marcus gets buck with her and walks out with Brooke and tells him that they are done. So weird yo.

I can’t stop thinking how gorgeous Princess is as she walks into the studio to talk to Ray with a pregnancy test in her hands. She bursts into tears and tells him the test is negative again. Lyrica is recording her songs when a couple of ladies walk in. One of them Ty Dollar Sign’s sister. He says he would love to sign her but unfortunately he can’t. He brings Lyrica in and tells them that this is his wife and she will tell her why he can’t sign her. Lyrica gets unprofessional as they leave and starts clapping and banging on the desk that he can’t sign anyone else and she is his wife. She throws water in his face and walks away.

Teairra and Cisco walk in and they start immediately with the firing squad and Nia asks straight about her problems with alcohol and Cisco said that she is doing better. Zell, everly thirsty for screen time makes comments about Cisco crying and Cisco says he is going to leave the situation and walks out. Teairra starts crying and is upset that they are not being supportive. They tell her to go get him and Zell offers to apologize. She walks out to go get him and he says that he is leaving and she has a decision to make either leave with him or go back to her friends. A clearly drunk Teairra walks away with Cisco.

A Summer Show You Should Be Watching - Claws

My thoughts on Magic Mike XXL