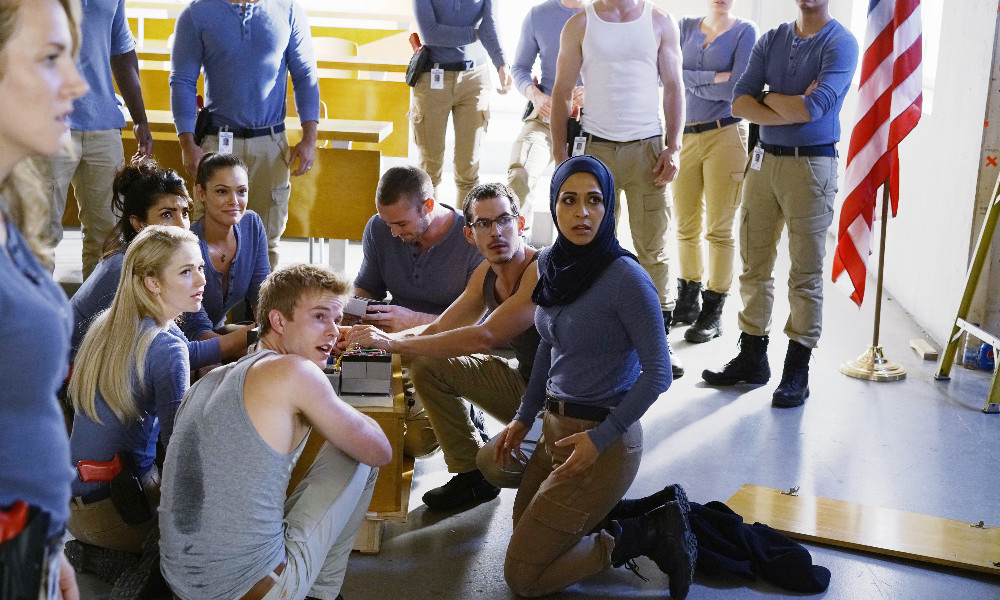 Back at Quantico, in the aftermath of the twin fiasco, Simon is seriously pissed. He feels the twins are incompetent if they were able to be caught so easily (I agree!) and he feels he should have been given a secret assignment too. Miranda tells him she will wipe off his probation if he agrees to keep the secret. Caleb and Shelby are still having their booty call and Shelby gets to meet Clayton through an embarrassing mistake.

This week, there is no training exercise for the recruits. Instead they get to have exams. They get a piece of paper; Miranda wishes them good luck and leaves the room. They turn the pieces of paper over only to discover they are blank. They are puzzled as to what it means and they decide to collate all the pieces; weigh, measure and count them where they find out one is missing (60 pieces of paper instead of 61). Surveillance shows that Brandon didn’t have 1 and he claims it’s because he knows he’s getting kicked out. While questioning him, he gets angry and storms out.

Then things get weird, the AC turns off and the doors lock. Further surveillance shows Brandon placing a bomb in the room. Elias says Simon has bomb-defusing experience and Simon tries to defuse the bomb. The recruits are 90% sure it’s all a test but there’s that 10% that scares them that it might be a real bomb (Especially since they saw a fellow recruit commit suicide right in front of their eyes). As the bomb ticks down, some of their fellow classmates run but the core of the main characters remain. When the countdown is over, Miranda comes back into the room and congratulates them for their service to the country. Turns out it WAS a test and the people that ran, failed and will be kicked out.

Elias gets kicked out. And he and Simon kiss. Alex confronts Ryan about why he took on the job tailing her and he tells her about a botched operation in Chicago that was Liam’s fault but he took the fall for. Alex then goes to Liam and basically threatens him into reinstating Ryan. He leaves Quantico before they get to talk. After Raina talks to Miranda about trust and safety, she decides to introduce the twins to the whole team. Finally, Caleb gets reinstated as a NAT instead of an analyst.

In the present, Simon and Alex go look for the twins. They discover Raina who said Nimah was the one in the surveillance taken at GCS 2 days before the bombing. She said they had infiltrated a terrorist cell but she hadn’t seen Nimah in 5 days so she was happy since the footage meant she was still alive. This makes Alex and Simon think she might be on to the bombing but Raina tells them she wasn’t. The terrorist cell is across from the house where Raina is and by using heat sensor “goggles” they can tell there’s a female there. Raina goes to swap herself for Nimah. When Nimah comes out, she is furious and wants to be put back. She said she’s made headway with the head of the cell and that he is planning a major bombing.

Shelby and Ryan blow their cover at the FBI office. They leave to go meet Alex. Unknown to Ryan, Natalie had put a tracking device in his jacket. They trace them to where they all are and it results in chaos. The terrorists get agitated by the sirens and shouting of the FBI and come out and start a shoot out. This leads to Ryan getting shot in the stomach. Natalie corners Ryan and Alex but decides to let them go when Alex offers to turn herself in just to get Ryan treated.
So…sigh. Is it possible to enjoy something and still be exceedingly angry at it?

The best part of the episode was actually the twin’s reveal at Quantico. For some reason I really enjoyed the scene. I also really LOL’ed at that picture Ryan was holding when he left Quantico because the Photoshop fail on it was quite strong. See you next week when we find out The.Biggest.Twist.Yet

My thoughts on the show “Tyrant” [No Spoilers]