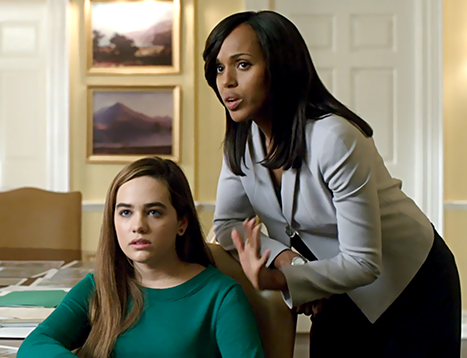 I think I can say with 80% surety that Scandal is back! Last night’s episode was probably one of my favorite episodes in the entire series. Olivia gets a call from Karen Grant, child of Fitz and Mellie Grant. She snuck out of school, ended up at a party and got herself piss drunk. So drunk she couldn’t walk herself out of the party. Olivia and Quinn get to the party; Huck blocks cell coverage so the kids at the party are unable to communicate to the outside world that the president’s daughter is at a party drunk out of her mind. They get her out of the party with no incident, until Karen shows them a video of a threesome starring her as the “thrilla in manila”. Liv gets on the phone and tells Cyrus to wake the President up because she just saw the “dirtiest sex tape I have ever seen in my entire life, and it stars the President’s teenage daughter!”

While Liv was telling him about Karen’s shenanigans, Cyrus was in bed with his new man toy, Michael. I honestly can’t believe Cyrus is carrying on with a man whore. It is so out of character to leave himself so vulnerable to blackmail but he is “grieving”. Also, if his dalliances with Michael ever get exposed, it will have repercussions that will affect not only him but the Grant administration as well. What are you doing, Cyrus? Use your head! He makes it to the White House just in time to hear Fitz yelling at his daughter about making a sex tape and doing the Eiffel tower. Fitz tries to convince Karen that the guys on the sex tape took advantage of her (not cool Fitz) but Karen lashed out and called him “lame” for even having that idea. Fitz tells Liv and co. to find the video and destroy it.

Quinn and Huck arrive at the White House to get to work on identifying the boys in the video and track down the video. Abby spots them and in typical annoying Gabby fashion, she proceeds to act like a complete asshole to them, ranting about how its her White House, blah blah blah. Thankfully, Cyrus comes up to them, tells Gabby they have a right to be in the White House and then tells her she will never be Olivia Pope and she needs to get over her jealousy of Olivia Pope if she wants to remain an employee. I’m so tired of Gabby. Sure her hair has never looked better and her outfits have definitely improved but why is she so unlikable this season?

While Liv is handling things, she runs into Mellie at the White House. As soon as she spots Mellie, Olivia turns around and tries to avoid her but Mellie chases after her and grabs her hand. Olivia gave her the greatest side eye and Mellie promptly lets go of her. Olivia gives her a once over and walks away from her. Mellie storms into the oval office to ask Fitz why Olivia was in her house.  This leads to an epic showdown between her and Fitz which gave us gems like drunk Mellie, smelly Mellie, cry baby Mellie. Fitz tells her she needs to get it together because her daughter was in a sex tape and Olivia is trying to make sure the video doesn’t get released. Mellie leaves the oval office but not before saying to Fitz “A sex tape. She takes after her daddy then, doesn’t she?” I hope she at least takes a shower before the next episode. She has a heart to heart with her daughter, they both hug, cry, talk about how they miss Jerry and Mellie tells her she gets this pass but she wont be so forgiving next time.

They finally find Karen’s sex partners and Liv meets with their parents in order to get the video and make sure they keep quiet about the whole thing. Things get real when the parents decide to cash in on the situation and demand $2.5 million from the first family in order to keep quiet about the tape. But these disgusting parents decide to go for a cool $3 million. Liv loses her temper and tells them she will destroy them and accuse them of making and distributing child pornography. I think they forgot they were dealing with Olivia Pope.

Somewhere in between all of this, Fitz and Olivia are alone in his office and the FitzVia music comes on. He begins his usual smooth talk, Olivia’s lips begin to quiver and they kiss but Olivia stops it before it becomes something more. Fitz asks Olivia where she disappeared to for two months and Olivia is hesitant to respond. Fitz turns into the brat he becomes when he doesn’t get his way and insists Olivia answers him. Olivia finally lets him know that she was not alone and she was with Jake. President Fitzgerald Grant is not happy to hear this and loses his mind. He begins to rant and say he has failed as a man among other things. Clearly, he has forgotten he is married and doesn’t own Olivia. He ends up storming out the office.

Meanwhile, Jake and Rowan are still at odds. At the beginning of the episode, Jake notices that his car has been rigged to explode. He presses his remote key and the car explodes. This is such a lame way to try to kill someone like Jake. Turns out SS Agent Tom was the one who planted the bomb much to Rowan’s disappointment. He tells Tom he better not disappoint him next time. Jake tells Tom he knows he tried to kill him and tries to convince him to join him in bringing down Rowan Pope. It’s very obvious to the viewers that Tom fears Rowan way more than Jake.

Due to Karen’s antics, the Secret Service is being audited and Tom finds himself in the eye of the storm when it is discovered that he was at the lab where the meningitis strain that killed Jerry Grant was stored. Fitz calls in Rowan to interview Tom. When Rowan continued to badger him to confess, he blurts out Jake’s name as the mastermind behind Jerry’s death.  While Tom was being interrogated, Jake was at the White House waiting for the president in order to share with him the details of Rowan’s activities. The episode ends with Jake and Tom being simultaneously arrested.

Look of the day - Pharrell