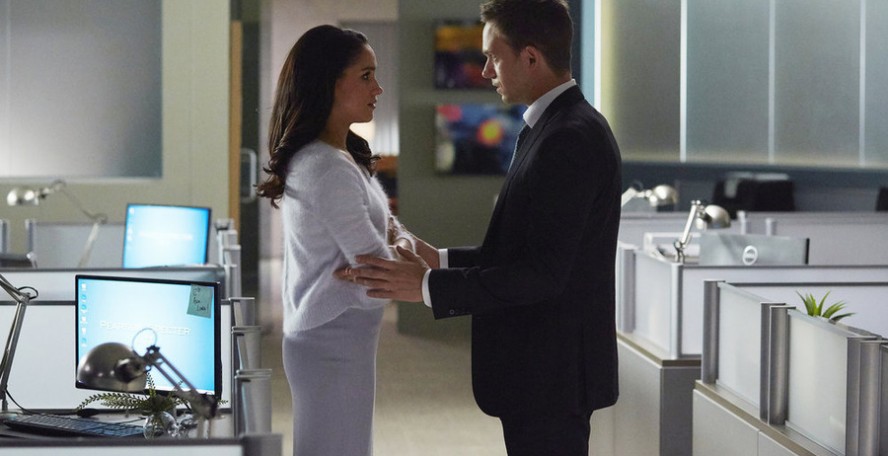 The Suits finale revisits the SEC investigation I thought we’d buried for good. All the usual suspects like Forstman, Cahill, and Woodall are back. We also find out the big secret that from 12 years ago that Forstman is holding over Harvey and it’s all so… disappointing.

But let me not get ahead of myself. We start off the episode with a flashback (another one!) to when Harvey met Donna. Donna asks Harvey to move to his desk because she wants to be an actress and she knows that Harvey will understand when she needs to miss the occasional day for an audition. While Harvey is chatting with Donna, Charles Forstman sends over a drink to Harvey and we therefore get the back-story of how Harvey became involved with Forstman.

Sean Cahill approaches Harvey for help in locating the money Eric Woodall stole, which is the smoking gun required to put Forstman away for good. Harvey approaches Mike for help as he’s having no luck himself. The show manufactures some pseudo-tension between Harvey and Rachel that has not been evident at all and this is supposed to be the driving force behind Mike and Rachel’s desire to unearth the missing money. I usually forgive Suits in this regard but the show is so unbelievably guilty of “telling” rather than “showing” here. There really hasn’t been any obvious tension between Rachel and Harvey for a while so the entire storyline comes across as being unwieldy. Regardless, our intrepid duo manages to figure out where Woodall has been hiding his money by looking into Harvey’s past. The two figure out that Woodall is paying for the care of his former wife, who suffers from Alzheimer’s disease.

We find out that Harvey agreed to work for Forstman after being offered a million dollars as a sign on bonus. Harvey has a previously unseen brother, Marcus, who has a serious gambling problem, and he asks Harvey for $150,000 in order to start his own restaurant. Harvey tells him that he doesn’t have the money but Marcus threatens to go to their stepfather for the money if Harvey doesn’t provide him with the money he needs. Harvey decides to take the job offer from Forstman despite protestations from Donna and Jessica and he quickly realizes what a huge mistake this is. Forstman hired him solely to get inside information on a stock trade and this puts Harvey on the hook for insider trading. Forstman threatens to disclose this if Harvey reports him and Forstman also reveals that he’s already given money to Harvey’s brother. This further embroils Harvey in Forstman’s illegal scheme and Harvey is therefore powerless to do anything.

Back in the present day, Harvey tries to persuade Woodall to testify against Forstman after he discloses that he knows about his ex-wife and her Alzheimer’s care. Woodall refuses but Harvey still gets his man after goading Forstman into admitting all his indiscretions while wearing a wire. We finally see Forstman get his comeuppance for his various indiscretions and hopefully, this is the last we’ll hear of this damn SEC case.

In our “B” storyline, Harvey and Donna are still acting like children after Harvey’s “I love you” declaration and relations between the two are strained, to say the least. Harvey backtracks and says he told Donna he loved her because he wanted to make her feel better. Unsurprisingly, this doesn’t go down well with Donna and the two have the most nonsensical fight. Seriously, I’m tired of these two and their back and forths. Either they get together or they don’t but enough of this stupid in-between.

Jessica is doing her version of “moping” after her breakup with Jeff. It’s looking like this breakup may be permanent as D.B. Woodside has been linked to a new Fox pilot. Jessica has been severely underutilized this season and I hope that the show gets it together next season. Gina Torres is far too good of an actress to be sidelined like this.

We also find out that Louis’ secretary Norma has passed away and Donna steps in to help him grieve. This leads Louis to ask Donna once again to be his secretary and although she initially refuses, she accepts by the end of the episode. I can’t imagine Donna being with anybody else but Harvey and I’m sure this will be a big part of next season.

Finally, Mike proposes to Rachel and she accepts. These two scenes are supposed to be the big, emotional scenes of the episode but they both fall flat. This was such a “blah” finale for Suits and I hope the writers find a new direction next season. However, I’m not done with the folks at Pearson, Specter and Litt yet and I hope I’m rewarded for my loyalty. See you guys on the other side.

What you should be watching - The Jinx