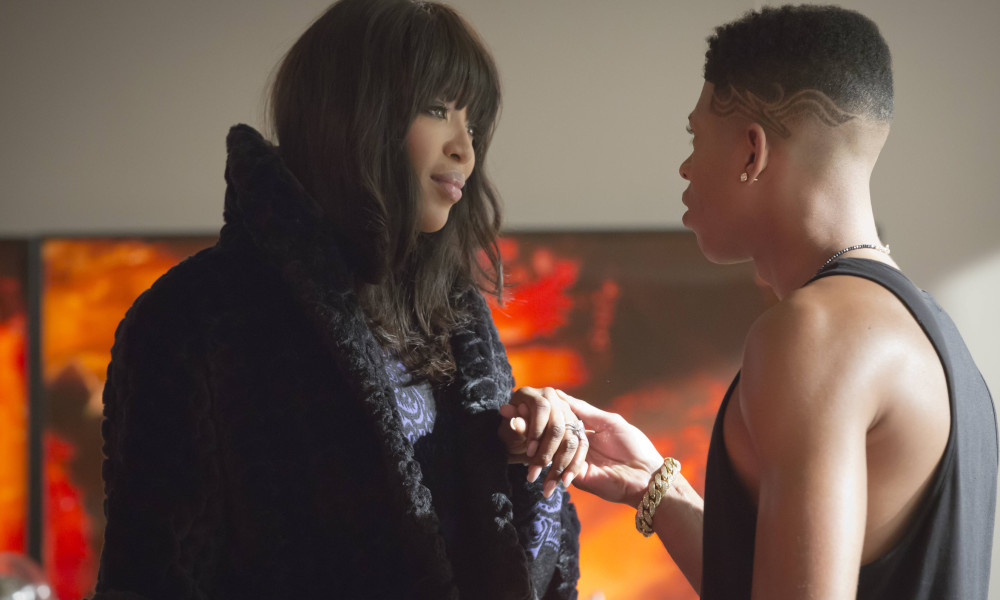 It’s nomination day for something called the “American Sound Awards” (ASA), which is clearly supposed to be a substitute for the Grammys and this is apparently an excuse for Jason Derulo to appear on my screen. We find out that Jamal’s been nominated for “Best R&B Singer” and he continues to rack up the nominations as the episode progresses.

Charlemagne also gets a guest spot this week and he’s clearly just playing himself as he interviews Sky and Jamal after a performance of their dry “all lives matter” song Powerful. He asks Sky if she’s “black now” since she’s always identified as bi-racial. He also inexplicably asks Jamal if he’s started dating a woman for convenience. This entire scene doesn’t make much sense because how on earth would Charlemagne know about Jamal and Sky? This is clearly another instance of a shoehorned guest appearance and I hope Empire sorts this out in the 2nd half of this season.

However, Jamal finally gets the balls to tell Sky that although he likes her and had sex with her, he’s still definitely gay and so nothing more can come of their new-found “friendship”…..

We also finally get to see Jamal’s Pepsi commercial and it’s entirely unoriginal. Scenes of dancing on subway trains and performing at Madison Square Garden are exactly what you’d expect.

Mimi is on Lucious’ back for leveraging divisions of Empire in order to buy Swiftstream and he lets her know that he doesn’t need the board of director’s permission to improve his own company. For some reason, Mimi has turned into 007 and has a recorder hidden in a pen for this entire conversation. Looks like Mimi truly cannot be trusted at all.

Hakeem doesn’t get a nomination for Rapper of the Year, whilst Freda Gatz does and this goes down about as well as you’d imagine. He and Cookie are also struggling with finding a new venue for “Cookie’s Cookout” since they found out about Laz’s betrayal.

Cookie is back at her old digs for “family day” and she’s struggling with being back at the prison in which she spent 17 years of her life. She sets up a performance featuring Hakeem and Laura for the inmates and she also catches up with some of her old prison mates. This includes yet another guest appearance, this time from Da Brat, who lets Cookie know that she’s been falsely set up for a murder on the inside. With this being Empire, I have no idea if this storyline is being set up for the future or if we’ll never hear from her again….

The Rhonda/Annika BFF train is still chugging along and Anika is once again hanging out at Rhonda’s new mansion admiring the new nursery. Rhonda stresses yet again that Lucious is a complete sap for babies and has begun to address her unborn baby as “the heir”.

At yet another showcase, we finally meet Mimi’s wife and it’s none other than Hakeem’s former lover Camilla (Naomi Campbell). The last time we saw her, Lucious had sent her packing back to South London in order to get her away from Hakeem. I guess that didn’t work out as well as he imagined. Also, I didn’t think it was possible but Naomi Campbell’s acting has managed to get even worse in her absence. Camilla wastes no time in sinking her claws back into poor Hakeem and their “love” scenes are still as icky and uncomfortable as ever.

Mimi uses her secret pen footage to call an emergency board meeting to remove Lucious as the head of Empire. Lucious and Andre figure that they’ll have the support of all family members so they’ll only need one more member of the board to vote with them to keep control of Empire. Let the lobbying begin!

Andre and Thirsty are unsuccessful in getting the support of other board members so Lucious leans on Jago Locke to get his vote. The vote finally takes place with everybody voting as expected until we get to the baby Lyon. Hakeem, after numerous flashbacks to remind us why he hates Lucious so much, votes to remove Lucious as the head of Empire. This is all with Camilla’s urging and this leaves Mimi as the new chairman of Empire. Mimi immediately installs Camilla as the de-facto head of the company as she apparently needs to go on immediate medical leave to treat her breast cancer. There’s just so much plot in this episode.

Lucious takes this about as well as you’d imagine and Cookie is forced to talk him down from the proverbial edge. The sting of betrayal is lessened somewhat by both Lucious and Jamal receiving nominations for “Song of the Year”, the most prestigious ASA category. Once again, it’s father against son.

The episode ends in the most horrible way possible as Anika fully embraces her crazy. She breaks into Andre and Rhonda’s house, skulks up behind Rhonda and pushes her down an incredibly long flight of stairs. Rhonda lands heavily on her stomach and the episode ends with a bleeding, lifeless, Rhonda all alone on the marble floor.

Empire doesn’t return until next Spring so we’re in for a long wait to find out the fate of Rhonda and the rest of the Lyons and maybe the writers will finally find a storyline for Tiana. We live in hope.

What To Watch on Netflix – February 2016

It’s A Good Show But…