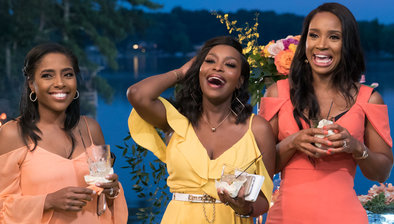 We continue with the couples trip in Antigua with the ladies on the boat and Simone stirring up some mess by coming for Contessa. I really don’t understand where Simone is coming from because she is an OBGYN and should know what a masectomy entails. Surgery is not just physical healing but mental, how dare her say she is shoving the surgery down their face and screaming at her too. Honestly find it bizarre. The argument escalates and they are screaming at each other with Simone’s finger in her face and cursing at her. Cecil drags her away and she starts cursing at Scott when he tries to defend Contessa saying she had good reason to be away, since they keep mentioning that she was away as if she went on vacation.

Devil spawn Heavenly, brokers peace and tells Simone to go over and talk to Contessa but understandably Contessa is upset especially at being called a victim. Par for course on a reality show, they allegedly smooth it over but we know that won’t last for long. Mariah gives a speech during lunch to own her shit and personally apologizes to Damon for accusing him of cheating but she throws subtle shade in the confessional saying “regardless of what he does inside and outside of his home, it’s none of my business”, Damon accepts and says he forgives her. Heavenly says she accepts the apology and hopes they can move forward. All is well and they start a dance off.

The dreaded annual “couples therapy” portion of the trip is here and to make them even more wary, Toya has decided to spring Heavenly on them as the host. No way this ends well. Heavenly is determined to do a redo but the couples are not convinced and proceed with caution. She starts by suggesting that maybe Damon sits it out and she does the talking, continuing the tradition of a suspicious cloud when it comes to Heavenly and her “Daddy”. Either way, Heavenly puts herself on the hot seat and they begin to ask her questions.

She heaps lots of praise on Damon as she answers the questions as we see Damon looking so pensive and like he is about to shit himself. Then it’s Quad’s turn and she asks Heavenly how old her oldest son is and how old she has been married. Heavenly answers 20 to both and Quad asks if she trapped Damon. And Heavenly without hesitation says “I did” and Damon is not happy. Damon comes up and says he would like to correct that he was trapped, that he knew that Heavenly was going to be his wife and will forever be. K.

Continuing with their traditions, they move on to the pro bono health screenings for the natives where Toya overshares again and saying how she would rather do the pull out method than be on birth control. Eugene and Toya continue to be my favorite couple as I watch him fix her eyelash glue. For their final dinner, Simone and Cecil are in charge and they pull Quad aside to let her know she doesn’t have to put on a brave face if she does not feel that way. Quad expresses her trepidation on how the divorce is going to go. As Simone screams her opinion to Quad (cuz she is loud), a roach climbs on to Quad which she sees as a sign from God and also that Greg is a roach.

Cecil and Simone have one last exercise for the group. The wives have to put something negative in a shell and put it out in the ocean and let it go. Simone’s is the pain associated with Cecil’s female best friend, Heavenly’s as usual is stupid and says its leaving the toilet seat up *rolls eyes* (can y’all tell how much I don’t like this woman?). Simone calls her out for not taking it seriously and Heavenly is saying she can’t think of anything and she doesn’t see the bad and instead starts listing her negative. Please this woman is exhausting. Toya’s is the negative energy from her attitude. Contessa’s is her overreaction to her husband when he doesn’t meet a romanticized vision. Jackie’s was obvious, pain from the cheating. Mariah’s was getting mad at both their families. Quad’s was releasing the hurt and feeling of betrayal.