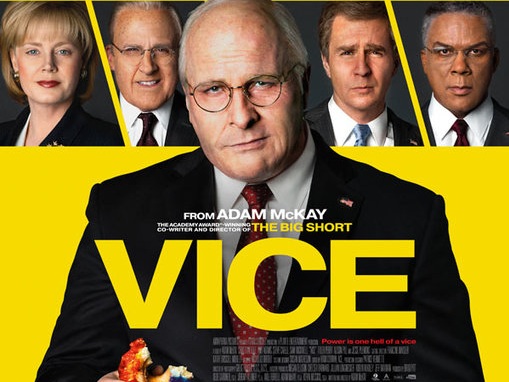 I don’t think this movie needs much plot description. Vice is a movie that gives us more insight into why/how Dick Cheney, Vice President during George W. Bush’s regime has been dubbed the most powerful Vice President in America’s history given that the job is basically seen as a “dummy” one.

The movie starts with a younger Cheney and how he was on a path to nowhere with two DUIs on his belt and being kicked out of Yale for drinking too much. Cheney’s wife, Lynne gives him a stern talking to basically telling him to get his shit together because she is not here to waste her time with a man going nowhere. Cheney looks her in the eye and lets her know that he will never let her down again. In hindsight, those were ominous words because in that moment begins his quest for power and the driver to every [what some may deem] cold-hearted rise to the top and the questionable decisions made.

I thought this was a serious, Oscar-bait biopic but McKay makes it easy for us to digest by making it a comedic movie. I hesitate to use the word comedy because the movie is quite factual and takes us on an in depth, behind the scenes of Cheney’s shenanigans. We see how he orchestrated his way in by attaching himself to Donald Rumsfeld (and eventually turning on him), how his wife, Lynne was just as ambitious as he was and the lengths he would go even if it involved his daughter.

Christian Bale is…wow. What a phenomenal actor. Like, really truly. He completely embodied Cheney (with the help of prosthetics) which made me even more bewildered at Sam Rockwell (as Bush) and Steve Carrell (as Donald Rumsfeld)’s performances. In comparison to how seriously Bale became his character, the aforementioned seemed almost caricature-like. Like Bale was in an Oscar-bait movie and they were in an SNL skit. It didn’t quite gel with me.

Like I mentioned earlier, the format which McKay took made it quite easy to take in. At some point during the movie, I thought the theater had a glitch but hang in there, it’s all part of the format. Stay tuned after the credits to see McKay’s sort of nod to critics who will quickly say that this movie was completely left wing propaganda.

Overall, I liked the movie and at this point, the best actor trophy is Christian Bale’s to lose. Besides, the Academy loves them some leader roles.

My Thoughts On BOTH #Fyre Documentaries