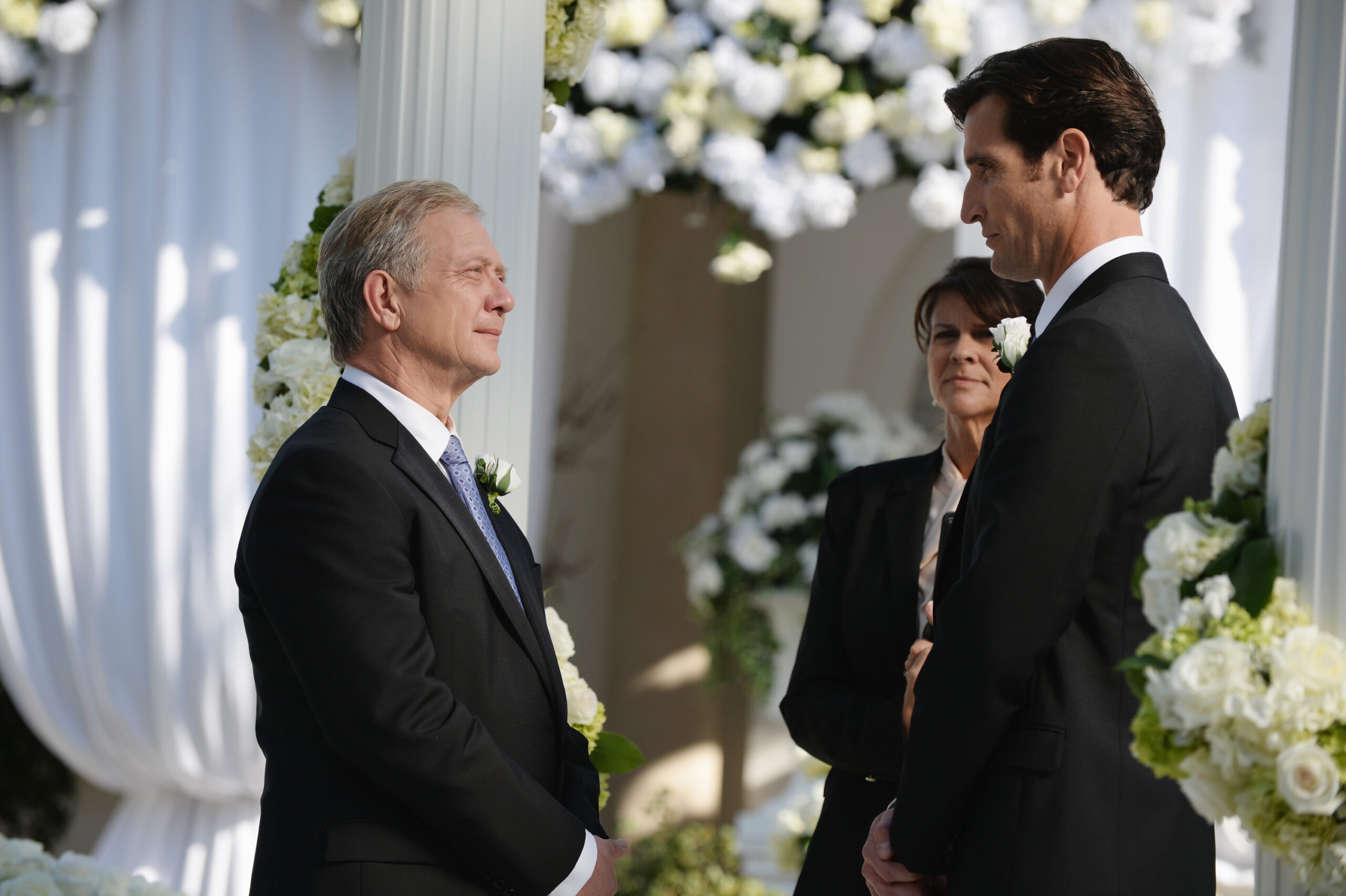 Uh oh. Cyrus’ faux-fiance, Michael has got himself in some trouble. The paparazzi caught him getting all handsy with another man at a gay bar. We see everyone’s phones going off in the wee hours of the morning and they all convene to discuss the matter at hand. Olivia Pope comes in to save the day with a shot gun wedding as the solution. Err, how is this the best solution to the problem? Well…we play along with the story. Cyrus is furious with Michael and is not happy with this decision but what can he do? To seal the deal, Olivia sidles up to Mellie and tells her it will be a great idea for her to throw the wedding at the White House for Cyrus. She says it will help in her political bid. A republican supporting a same sex marriage. Of course, Mellie eats it up and it’s decided – a wedding is going down.

We get flashbacks into Cyrus’ previous weddings starting with his first one to a woman (played by Emily Bergl, Sammi on Shameless). She’s a good catholic girl who has been saving herself and Cyrus asks her randomly to marry him only after a few months of dating and even though he knew he was gay. May I just say the wig he had on for his flashback was so atrocious, he looked like a cast member on Interview with the Vampire. They should just hire a look alike actor to do Cyrus flashbacks. Somehow the sham of a marriage lasts 15 years and ends with a drunk Janet telling Cyrus that she can’t do it anymore and lets him know she knows he is gay.

Sally Langston (who for some reason, I thought was dead) pops up on our screens and is now hosting a Nancy Grace-type show and tells her audience that her sources have informed her that Cyrus’s wedding is a sham and Michael is actually seeing someone. Some how, Abby figures out that Leo is the one feeding Sally Langston the info. They have a little squabble – I honestly can’t figure out these two’s relationship. It’s like Leo loves Abby’s power but I guess we will see how it plays out.

Cyrus flashes back to wedding #2, his wedding to James. James was having doubts about Cyrus being able to separate their relationship from work – this is why it’s good to listen to your instincts. Cyrus promises James that he will, which we know he doesn’t keep. So if you are counting, you can see the recurring theme in all of Cyrus’s marriages is lies.

Olitz have to be sprinkled into this wedding episode somehow and we see Olivia have a flashback of getting Cyrus honeymoon night bed (to James) ready by sprinkling rose petals. Fitz walks in and gives her a present, his grandmother’s ring called “sweet baby” (who names a ring?) and tells her to always wear it even if she hates him so he can feel connected to him. *insert more lover words* Olivia kisses and hugs him and tells him she can never hate him. Back to present day, she has one of her nightmares and suddenly begins to frantically search for the ring. She finds it in a vase (huh?) and all is right in her world.

Olivia threatens Sally with the whole killing her husband thing and Sally doesn’t budge. She eventually gets Sally to relent by saying Michael’s client includes Sally’s ex husband and somehow that works.

Cyrus and Michael have a disastrous dinner with his parents who aren’t nice to him and his dad informs him that they are being paid to smile and eat with him which completely breaks him down and makes Cyrus feel sorry for him. The day of the wedding, Michael has a heart to heart and tells Cyrus how he always dreamed of his wedding day and always thought he would find someone who loves him yet the day is here and he feels alone. Cyrus promises to try his best to be a good companion and Michael isn’t alone. Hug. Kiss. Cry. Wed.

Olivia walks out in the reception and is wearing her “Sweet Baby” ring. Fitz notices it and has like a look of relief. They have their longing look/moment and all was semi-right in their world.