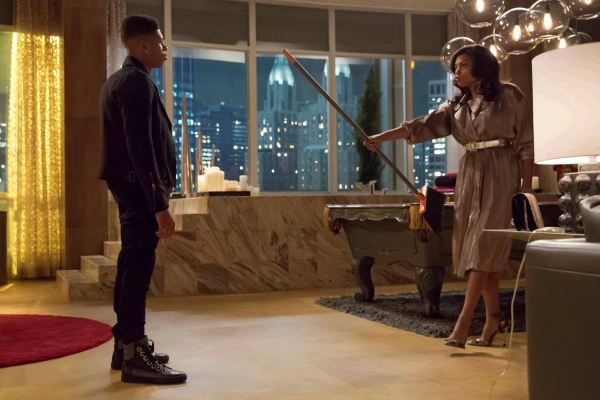 We’re back at it again with the Lyons in the second half of the season and we pick up right where we left off in the aftermath of Hakeem’s betrayal.

Lucious, true to his character, refuses to be kicked out of his own company and flat out refuses to leave the building. Andre tries to be reasonable and says they can use the charter to find a loophole that prevents Hakeem from kicking Lucious out of his own company, but when has Lucious ever understood the word “reasonable?” Camilla (Naomi Campbell), sets the cops on him and Lucious is saved the indignity of being physically thrown out when Becky rushed in to inform him that Rhonda is in the hospital.

Cookie takes us right back to the glory days of season one and beats the crap out of Hakeem with a broom when he refuses to recant his vote to remove Lucious as CEO. Empire, ever consistent with the lack of subtlety, shows us a flashback.

In what is quickly becoming the Jamal Lyons musical hour, Jamal once again regales us with admittedly one of his better songs “Heavy” whilst a blood-soaked Rhonda drags herself across the floor to get some help. She prays for God to save her baby and take her instead but I’m sure we can all guess how this is going to go….

Rhonda loses her baby along with her faith in God and she seems to have little to no memory of her attack. She is visited in the hospital by Anika, who we’ve been led to believe pushed her down the stairs in the last episode. Now knowing Empire, I wouldn’t be surprised if we find out later that it wasn’t Anika who pushed her after all and the entire scenario turns into a massive “whodunit.”

The Lyons clan have a reunion at the hospital when they hear the news about Rhonda and even Hakeem’s traitor ass shows up. Cookie wastes no time in telling him where to go and he’s left as a helpless bystander to his family’s collective pain.

Cookie spends all episode offering Lucious the support he’s consistently failed to show her and she decides the best way to get him his position back is to sabotage her way from the inside out.

Camilla (sidebar- I didn’t think it was possible but Naomi Campbell’s acting has become even worse since the break. It’s truly a wondrous thing to behold), informs Hakeem that he needs to ditch the Virgin Laura if he wants her to help him oust Jago Locke and become the CEO of Empire. Cookie pays the lovebirds a visit and offers to the same thing for Hakeem, but fresh from the aforementioned broom beating, Hakeem chooses to stay with the “scallywag”, Camilla.

However, Hakeem’s backbone seems to have strengthened during the break and this leads him to apologize to the Virgin Laura for ditching her for Camilla and a piss-poor apology is apparently all that’s needed for Hakeem to finally get into Laura’s pants and the Virgin Laura is a virgin no more. The lovebirds trade a series of “I love yous” and I’m sure this will all end happily ever after….

Cookie, Jamal, and Andre have a meeting with new CEO Hakeem (wearing the ugliest pound note-covered suit in the world) and Cookie negotiates her way back into Empire by offering up Lyon Dynasty. She also finagles her way into the role she’s wanted all along- head of A&R at Empire, and despite Camilla’s best attempts, Hakeem gives in to her demands. He just wants his family back together y’all.

Our “sexually fluid” Lyon brother Jamal is in hot water with his mentor, Jameson after his dalliance with Skye (Alicia Keys) is made public. Jameson believes that Jamal has turned his back on the gay cause and withdraws his support of Jamal. However, after a bolstering talk with Cookie, Jamal is inspired to perform a song about sexual freedom at Jameson’s showcase and all seems to be right again.

Jamal’s storyline just seems to be an excuse to shove Jussie Smollett’s music down our throat these days so there doesn’t seem to be much point to it at all. However, his scenes with Cookie are extremely enjoyable as the two share a wonderful chemistry, which translates to the screen from their real-life friendship. I would be definitely here for the Jussie and Taraji show.

Lucious is just like an African aunty- so dramatic, and he assembles the help of his prison crew to scare some sense into the dissenting board members who want to take on the role of CEO of Empire for themselves. His band of merry criminals systematically scare off the board members one by one, (including at one point stringing a cat up by its tail) and the path seems clear for Lucious to return as CEO. However, traitor Lyon Hakeem is still the main obstacle and Lucious decides that taking Hakeem to the exact place where he shot Bunkie, forcing a gun into his hand, and goading Hakeem into killing him is the best way to get him to drop his CEO bid.

The reemergence of Hakeem’s backbone means that Lucious’ plan fails when Hakeem tells him to go to hell. Hakeem is determined to hold on to his role of CEO so Lucious is just going to have to take it from him. Will he succeed? Find out next time on Empire.

A Show You Should Be Watching - Happy Valley

A Mini Series You Should Watch – #Unorthodox