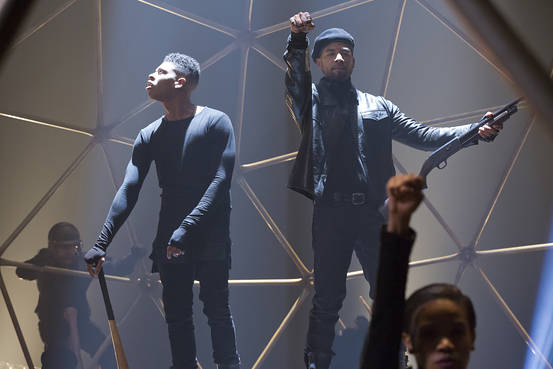 This week with our friends over at Empire, things start off with a bang with the offices of Empire being raided by the F.B.I. As Jamal croons in the background, we see the Feds completely ransacking the offices to find any information they can on Lucious’ nefarious activities.

Jamal is apparently so fascinating that he can’t keep the interviewers away and this week it’s the turn of Rolling Stone. We find out that Jamal’s album The Artist is going to be executively produced by Lucious and he has an accompanying cover to go with the Rolling Stone interview.

Anika is still nonsensically begging Cookie for a job and once again, Cookie treats her like scum. I’m just baffled because this cannot be the only job in town for somebody like Anika. However, Cookie throws her a bone and lets her know that she can rejoin Dynasty if she can sign the rapper, Royalty. As our folks over at Dynasty are celebrating the news of Empire being raided by the Feds, schadenfreude rears its ugly head and the Feds show up to raid the offices of Dynasty too.

The Federal raids continue as Prosecutor Ford (fondly referred to as “Legal Tits” on twitter) personally leads an additional raid on Lucious’ house. Lucious’ lawyer, Thirsty gives him a heads up and this enables Lucious to meet the Feds (and specifically Legal Tits) in nothing but his birthday suit. The raids only have the effect of further convincing Lucious that the prosecution have no real evidence on him and he resolves to continue to expand the output of Empire with the support of Mimi Whiteman (Marisa Tomei).

At yet another confusingly frequent family gathering for a family that’s supposedly at odds, Lucious and Cookie agree to have Hakeem and Jamal film a video together in order to present a united front to the world. Cookie lets Lucious know that Hakeem won’t be doing the video until he quits trying to poach her artists, obtaining her masters, and keeping them off urban radio. Lucious suspiciously agrees to all of Cookie’s demands bar the radio issue and it looks like the Lyons Brothers’ joint video is on.

At this same meeting, Hakeem straight up asks Lucious if he killed his uncle Bunkie and Lucious categorically denies the charge while the camera cuts to smirks of disbelief from Cookie and Andre. Thirsty says that the best way to get the heat off Lucious is to find Vernon and convince him not to testify. The last time we saw Vernon he was expelling his brain matter all over Andre’s nice carpet so we all know that’s not going to happen.

Back in Jamal’s useless storyline, his Rolling Stone cover is causing tension between him and his boyfriend Michael as Jamal engages in a weird flirtation with the photographer. A photo from the shoot turns into a painting which is then plastered over the walls of the city by episode’s end. I really don’t understand or care about this storyline at all and I’m confident that I’m not alone in this assertion.

Andre is still begging Lucious for a place back at Empire and he asks if Lucious will allow him back into the fold if he finds a way to make his legal troubles disappear. Once Lucious agrees to his proposition, it’s not long before him and a pregnant Rhonda are armed with shovels, digging in the woods in the dead of night. They are however, rudely interrupted in their exhumation activities when Lucious and Thirsty show up. Lucious lets Andre know that he had him followed and he’s so impressed by the lengths Andre is willing to go to come back to Empire that it’s not long before we have all four characters digging together to bring up Vernon’s family. Ah teamwork. Warms the heart doesn’t it?

Back at our music video set where the look of the day is “a post-apocalyptic Black Panthers theme with the brothers fighting police oppression” (direct quote…), Jamal and Hakeem struggle to hide their mutual disdain. The video, which looks like the “California Love” video meets Biodome goes about as well as you’d expect and it comes to a premature end with Hakeem threatening Jamal with a baseball bat before storming off the set.

Cookie steps outside to make a phone call and is quickly snatched up by the Feds on a bogus charge. She is shoved in a police car while screaming “If I die in police custody, I did not commit suicide”, echoing the recent case of Sandra Bland. I appreciate Lee Daniels’ attempts to be au courant in many of the scenes of Empire but I have to admit it bugs me a little when the very real concerns of current issues like the Black Lives Matter movement is shoehorned into plots about a dodgy and definitely criminally guilty fictional family.  Small quibble aside, Cookie finds herself in a room with Legal Tits facing a parole violation if she doesn’t turn over some information on Lucious. After spending 17 years in prison, Cookie is most definitely not about that prison life and after some brilliant flashback acting from Taraji P. Henson, Cookie tells prosecutor Ford that Lucious and Bunkie were fighting over “some radio station” before Bunkie turned up dead. Ford, oblivious to Cookie’s lie, infers that they were fighting over Apex radio and resolves to shut down Lucious’ deal to buy it. This is of course exactly what Cookie wanted and she is quickly released back into the wild.

Meanwhile Hakeem is drowning his sorrows in a random bar when he is captivated by a live singer who looks like a cleaner, more wholesome version of Valentina and I guess we have our new candidate for the lead singer of Mirage A Trois.

The episode ends wonderfully with Prosecutor Roxanne Ford getting into her car in the morning only to find the rotting, decaying body of Vernon just chilling in her passenger seat. I can’t wait to see the fall out in the next episode.

And just like that, we are in December. I can’t believe it. Hope everyone gets to enjoy the holidays. If you are staying indoors, hope