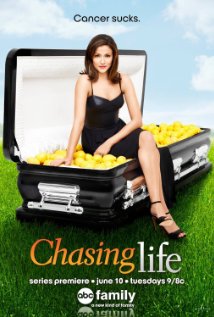 The last time I got invested in an ABC Family show, I hated myself for it. It was the show that launched Shailene Woodley’s career – The Secret Life of the American Teenager. Gosh, that show made me hate myself. I vowed to stay away from any ABC Family show after that. Then I saw the preview for “Chasing Life” and I knew I wouldn’t stay away.

Chasing Life is actually an adaptation of a Mexican television series called Terminales (geez this sounds so morbid). It follows the life of 24 year old April who is an aspiring journalist that lives with her mom, sister and grandma. She also just started a new relationship with a coworker at her newspaper. Her father, an author, recently passed away and their lives are just beginning to pick up when a random fainting spell leads to April’s enstranged Uncle (George) letting her know that she has cancer (Leukemia).

The story fleshes out and focuses on how April is trying to deal with the news which includes hiding it from her loved ones. There are also other stories interwoven in the story line. April uncovers a family secret, April’s younger sister is in a love triangle, April’s mom has dating horror story and April meets a fellow cancer friend at the support group.

I am not going to lie and say that my penchant for morbid stuff didn’t draw me to this but 7 episodes in and I am impressed with how the subject matter is being handled. It seems as close to realistic as tv can manage in showing how one deals with cancer, how it affects the family and how life takes on true meaning for those with such a terrible disease.

Give it a shot and tell me what you think. Chasing Life airs Tuesdays on ABC Family at 9/8c