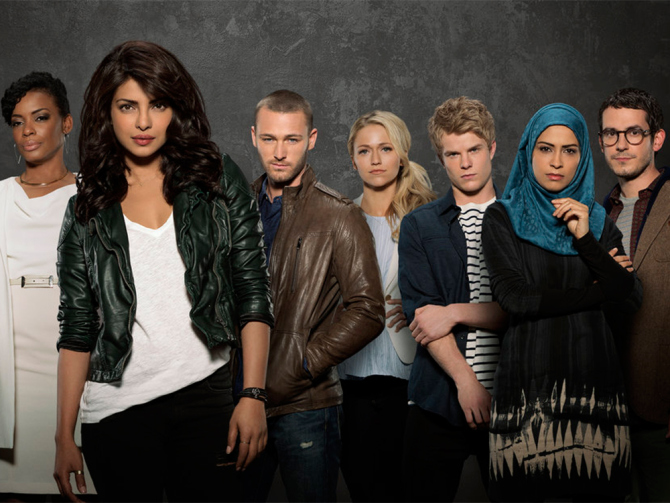 Quantico opens with a bang or the aftermath of one. The episode opens up with a bombed out Grand Central Station and the scene cuts to the past where we are introduced to the main members of the show. The first is the star of the show, Alex Parrish who leaves for Quantico while lying to her mother, she meets a guy named Alex on the plane and the two hook up in a car when they land and Alex gives us a glimpse into why she is headed to Quantico. She points out 5 things to Ryan that only a really observant person would get. She heads on down to her destination and realizes that Ryan is also a recruit. In quick succession, we meet some other new recruits – Shelby (the southern gal), Elder Eric (the private mormon from Salt Lake City), Caleb (the rich boy), Nimah (A hijab wearing recruit) and Simon (the nerdy “gay” guy)

The show then cuts back to the present and that sets the format for how the rest of the episode ran. We get to see scenes in the aftermath of the bombing with flashbacks of their time in Quantico. Through flashbacks we saw more of their time in Quantico that showed more of the individual characters and their strengths and weaknesses. For example, getting to know that Shelby was a crackshot, that Elder Eric excelled pretty much at everything and that Caleb was really quite useless. We also got to meet the 2 main instructors Miranda and Liam who have a complicated relationship. The two have dated in the past and Liam seems to be struggling with a drinking problem and we see Miranda cautioning him and telling him he needs to get his act together.

The training/investigation exercise, where the recruits were paired up and told to dig up something about their partner that noone knows, was a chance to learn more about the backgrounds of some of the recruits e.g. Shelby’s parents dying on a 9/11 flight, Alex killing her dad in self defense and Simon traveling to Gaza even though he had a strict Jewish background. It also culminated in the WTF moment where Elder Eric ended up taking his life because he felt his secret had been uncovered by Caleb because Caleb had been taunting him all day about it. But as mentioned earlier, Caleb really is useless and had not uncovered anything and resorted to bluffing. The other WTF moment in the episode (and my personal favorite) was the Nimah twist. Due to her religious background, Nimah gets to have a room to herself and earlier in the episode Simon had asked her why she pinned her hijab on different sides on different days. We find out that there are two Nimahs aka looks like she has a twin.

At ground zero (the present day, bombed out GCS), Alex is told that the bombing was a result of an inside job and that one of her fellow recruits was a terrorist who helped mastermind it. Eventually, due to new “unearthed” evidence, the senior FBI officials decided that Alex was the terrorist and she was arrested. She however got to escape with the help of Miranda who told her she was being framed and the last shot we have of the episode was Alex merging with the crowd while on a mission to find out who was framing her and why.

I honestly didn’t expect to enjoy the show as much as I did and if you were anywhere on the internet in the past month, you would have seen the numerous ads that seemed cheesy. I however had planned to watch to support my home girl Priyanka  so I’m extremely relieved  I liked it. One of the strongest things going for it is that I feel it’s made of very likable characters and had just the right mix of entertaining and crazy things to keep me interested.

There’s so much story to mine in the show. For instance why is Liam so interested in Alex to the point of putting Ryan to shadow her (and apparently without the approval or knowledge of his superior officer), is there a future for Ryan and Alex? Is Simon actually gay? (my gut says NO), What exactly is Caleb’s strong point? (saw in previews he will be back), who is the terrorist??. If they can manage to have a coherent story that doesn’t go to crazy I do believe we are in for a good time. So, stick around and see you next week!

P.S. I think the terrorist will be nice guy not-so-gay Simon. Do you have any guesses on who it is?

Cover of the Week – Idris Elba on Maxim

My Rankings of All The #RealHousewives Franchises