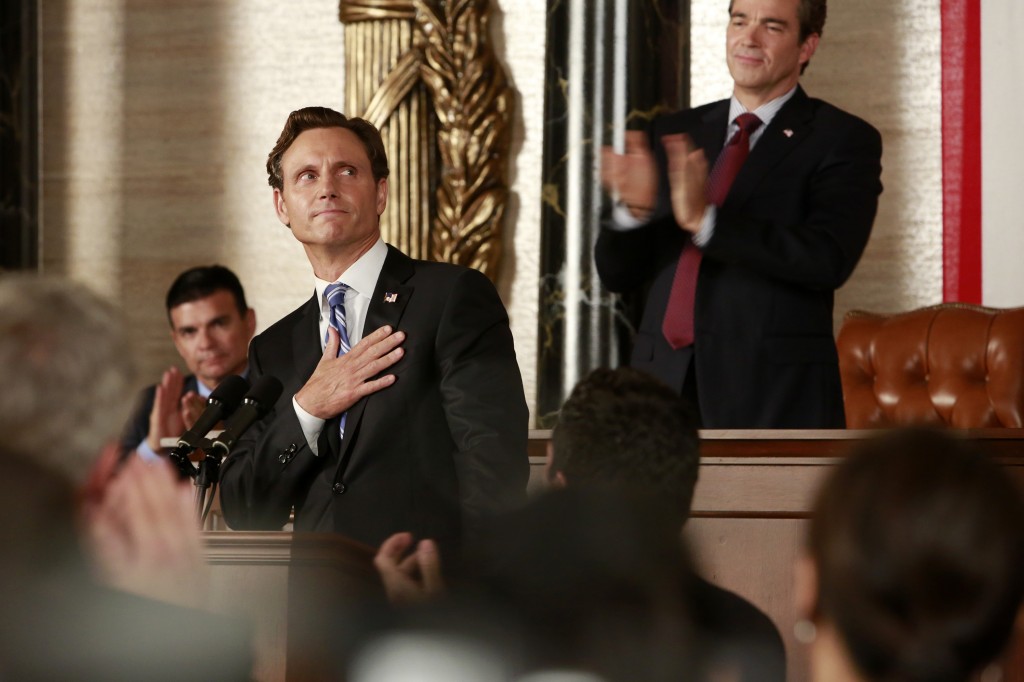 OPA (Olivia Pope Agency) was enlisted/blackmailed by the Whitehouse/Cyrus to fix another case of the week – A Taliban POW survivor and his gun violence victim/now paralyzed wife who have become the poster couple for stricter gun restriction. The couple is supposed to serve as backup for the president’s state of the union address and gun restriction campaign. The only problem is that they hate each other and have refused to show up. After several nasty confrontations, including the husband being stabbed in the leg by his wife , Olivia offered them a solution to their problem: divorce. And in true Olivia Pope fashion, she promised to make sure they would continue to milk their situations as long as they showed up for the president’s speech as a unified duo. Of course Abby, also known as counterfeit Olivia was not happy with the White House enlisting the help of OPA since she is supposed to be White House press secretary. Whatever Abby, a wardrobe change does not magically give you Olivia Pope abilities. Speaking of Abby, she was tasked with getting “grieving Mellie” to show up for the State of Union speech after she refused to show up. I was honestly expecting Mellie to snatch her up by her hair and bite her but she somehow convinced her to get it together.

When I’m watching Scandal, I get so caught up in the drama of it all. A few hours after viewing, inconsistencies stick out to you and you are left wondering what exactly the writers were thinking when they came up with these plots. Mellie is still a grieving mess and she was spotted by the paparazzi looking a fool at her son’s grave, which prompted “crazy Mellie” headlines across the nation. Let me tell you why I’m over “Grieving Mellie”. Mellie told Fitz she had to “have kids for him”. Mellie induced her youngest child Teddy just so she could maintain some kind of hold over Fitz. Mellie had her kids shipped off to boarding school. Mellie has consistently shown that she will do whatever it takes to get what she wants. So I don’t buy this grieving mother act and I hope this is the last we see of it. While she (Mellie) was finding solace in a plate of delicious looking fried chicken, she had a heart to heart with “grieving Cyrus”. Cyrus that almost had his husband killed in Season 2? Cyrus that set up his husband in order to catch him cheating? These are the kind of inconsistencies I see on this show that really piss me off. You have clearly established Mellie and Cyrus as morally bankrupt human beings, why are you trying to make us feel sorry for them now?

Speaking of morally bankrupt, Lizzie Bear’s role on the show was sort of established last night. She hired a male escort to seduce Cyrus. For someone as sinister as Cyrus, I’m surprised he didn’t immediately know something in the milk wasn’t clean when this young hot stud started chasing him and his new wig. David finally took some advice from Abby and got some power of his own via blackmailing a senator that was trying to block his State Attorney confirmation. Quinn is still acting desperate even though Huck has shown her that he is not interested. Girl he pulled your teeth out! Do you need him to cut off your tongue too?

After seeing Rowan Pope creeping around during Harrison’s funeral, Jake’s spidey senses started tingling so he is now investigating the circumstances surrounding his death. He is also letting Olivia know that he is a strong independent man so he got himself a hotel room and let her know he is available for booty calls. You go boy! Olivia and Fitz had a brief reunion where she went over his speech with him. Call me crazy but wasn’t Fitz a victim of a gunshot wound to the head? Why didn’t he use his experience instead of using the horrible couple and his dead son? Dude you were in a coma! Use it! I guess the events of the day got to Olivia because she showed up at Jake’s hotel room wearing nothing but a trench coat and a pair of boots that were definitely not made for just walking. I’m not even mad at her.

2 episodes in and I’m still underwhelmed. Hopefully the season gets better.

Look of the Day: Angela Bassett